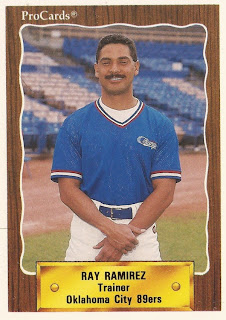 Wright sat on the ground in this August 2009 contest, after getting hit in the head with a 93-mph fastball. Mets head trainer Ray Ramirez used a light to check Wright's eyes, The Times wrote.

Wright couldn't stay in the game, Ramirez told Wright, according to The Times. He likely had a concussion, an injury to which Wright ultimately lost two weeks of playing time.

Ramirez has been watching over Mets players as head trainer since 2004, part of a training career that goes back more than two decades.

Ramirez' career began in the 1980s, out of college. Ramirez earned his bachelor of science degree in physical education from Hostra University in 1982. He then got his masters in sports medicine from Long Island University four years later, according to his CMC card.

By 1994, Ramirez was with the big club, as Rangers assistant trainer, tending to an injury to Juan Gonzalez.

Ramirez stayed with the Rangers in that capacity through 2004. In 2003, Rangers GM John Hart credited the training staff that year, including Ramirez, with putting a bigger emphasis on learning players' past injuries, MLB.com wrote.

Ramirez that year went to Puerto Rico and the Dominican Republic to work with players, MLB.com wrote.

For 2005, Ramirez moved to the Mets, making the jump to head athletic trainer. In the years since, he has watched over his share of Mets injuries.

That first year, Ramirez spent one night on a cot in a San Diego hospital, watching over Met Mike Cameron after a surgery. In 2008, he had to hold Ryan Church out of the lineup to ensure he was symptom free from a concussion. In 2011 he told Carlos Beltran he had conjunctivitis.

Ramirez continued to serve the Mets as head trainer for 2014.