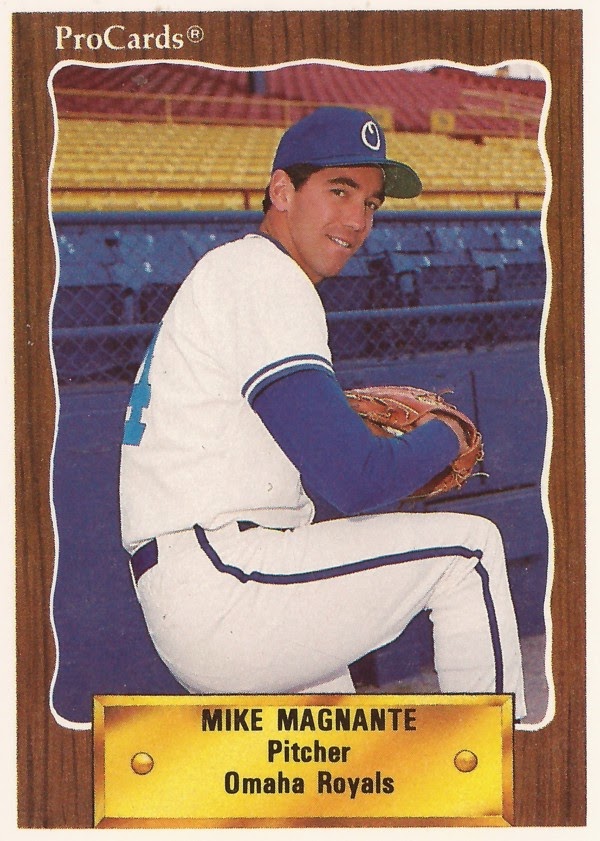 A pitcher at UCLA, Mike Magnante took to the basketball court in late 1985 and promptly tore up his knee.

It was something he was angry at himself for doing, and it put his baseball goals aside until, that is, he could recover, he told The Los Angeles Times in 1988.

"During my recovery I wasn't banking my whole life on baseball," Magnante told The Times. "I had no thoughts at all about playing professional baseball. I just didn't think I was good enough. I wasn't good enough. I was just so angry at myself for getting hurt that I felt I had to make it back."

It wouldn't end until late July 2002, and then on a pure numbers decision from Oakland's numbers man and general manager Billy Beane, a scene chronicled in the book Moneyball. The decision would leave Magnante days short of collecting a full pension.

Magnante's professional career began that year in 1988, playing with three different single-A teams. He moved to AA Memphis in 1989 and AAA Omaha in 1990.

It was in April 1991 that Magnante made his major league debut, a three-game stint where he gave up three earned runs in 4.1 innings. It was also a change from his usual role to that point of starter. A second stint, though, he did better, finishing with a 2.45 ERA in 38 outings.

"The second time up, I was much more prepared mentally. I was more confident in what I could do," Magnante told The New York Times in early July. "I know how to get ready quicker now. I have a better idea of what I want to do, and I've talked to the catchers about what I want to do."

Magnante returned in 1992 for another 44 outings, 12 of them starts. He went 4-9 with a 4.94 ERA. He moved to the starting rotation in May. But, by June, was in danger of moving back to the bullpen. A seven-inning, one-run effort June 3 helped stave off that move.

Magnante got six more starts in 1993, but after that was primarily used in relief. Magnante stayed with the Royals through 1996, getting at least 28 outings each season, except 1993.

For 1997, Magnante signed with the Astros, spending two seasons there, posting a 2.27 ERA his first season and a 4.88 mark his second.

He joined the Angels for 1999, the team he'd followed as a kid. He also did well, going 5-2 with a 3.38 ERA. The wins, though, were not necessarily something the relief pitcher wanted, Magnante told The Times in May.

"If you're getting wins, then something bad is happening somewhere along the way," Magnante told The Times. "Either you've come in and given up the lead or we were behind when you got in there."

Magnante's release is outlined in the book Moneyball, in the chapter The Trading Desk.

"He thought of himself the way the market thought of him, as an asset to be bought and sold," Michael Lewis wrote in the book of Magnante after his release. "He'd long ago forgotten whatever it was he was meant to feel."

Magnante has since changed careers. The man whose career was done in by numbers is now teaching them. Magnante has served as a math teacher at Agoura High in California.

"I don't know who's doing who a favor,'' Magnante told The Los Angeles Daily News in May 2005. "Me teaching them, or them letting me have this great experience. It's so great to be able to give back and do something you love. I always wanted to teach. I'm lucky, I'm doing what I want."