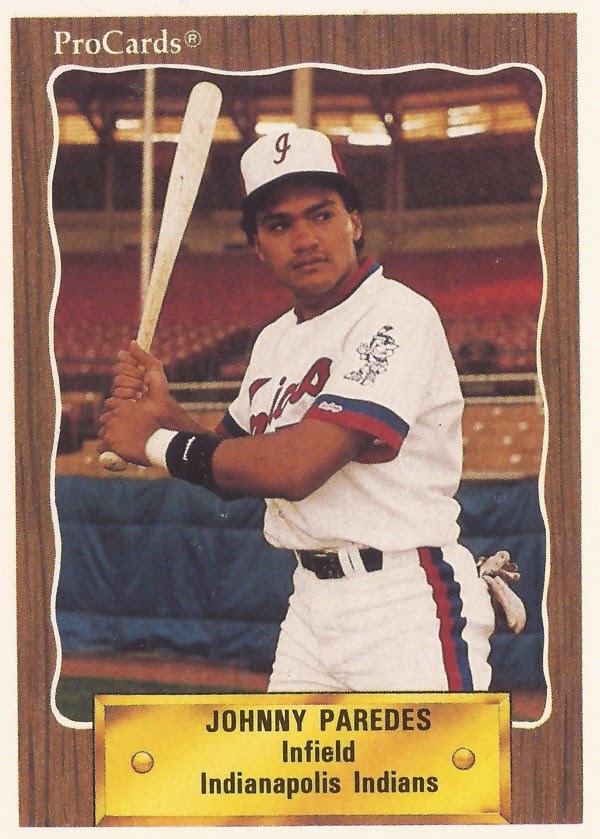 When Johnny Paredes came to bat in the eighth inning of this July 1993 game, the outcome of the game had already been decided, his AAA Toledo team was up 8-0.

Paredes just wanted to continue what he'd been doing throughout the game, that was get hit, The Toledo Blade wrote.

"I knew I needed a home run for the cycle, but I didn't want to do it. I was looking for five hits," Paredes told The Blade after the game. "I did it one time in 1987 and I wanted to do it again."

Paredes ended up flying out to left, The Blade wrote. He would get few other chances to achieve the feat again. Paredes was playing at the end of an 11-season professional career, one where he'd made the majors in parts of three seasons.

Paredes' career began in 1982, signed by the Phillies out of his native Venezuela. He played two seasons in the Philadelphia system, playing at rookie league Helena and single-A Spartanburg, then was released.

Signing with the Expos for 1984, Paredes played the year at single-A West Palm Beach.
He hit .253 on the season, knocking in the winning run in a June game with an 11th inning double. He returned to West Palm Beach in 1985. He also briefly made AA Jacksonville in 1985.

At West Palm Beach that year, Paredes got off to a hot start. According to The Palm Beach Post, that start included hitting .348 by the end of May.

"Right now, he's one of the team leaders in almost every aspect," West Palm Beach manager Junior Miner told The Post in late May. "He's always getting on base, he's a good defensive player, and his batting average for this time of year is outstanding."

Paredes hit .315 at Jacksonville in 21 games that year. His average at West Palm Beach, however, sank to .261. Nonetheless, it was back to Jacksonville for 1986 and then AAA Indianapolis and that five-hit game in 1987.

It was in April 1988 that Paredes made his major league debut, going 1 for 3 April 29 at Houston. Paredes went on to play 35 games for the Expos that year, hitting just .187. He got two of his hits in a May game against the Dodgers, singling twice with the bases loaded and knocking in three. Paredes stayed up through the end of May, returning in September, called up with another Expos prospect, Randy Johnson.

Elbow problems sidelined Paredes for 1989. He returned in 1990, selected by the Tigers in the Rule 5 draft. In six games for the Tigers, Paredes hit just .125 and was offered back to the Expos. He returned to Indianapolis by May. Three more late-September games and Paredes' Expos career was over.

Released, Paredes signed back on with the Tigers, Paredes played another 16 games with Detroit in 1991, getting a total of six hits. Four of those hits came in one game, his first start after the call-up, matching his four-hit feat he would accomplish two years later at Toledo. But this feat was in the majors.

He had four singles in four at-bats, according to the wire account. He also scored three times. Those were Paredes' final games in the majors. He played most of 1992 in Japan and returned to Toledo for 1993 and that four-hit game, ending his career.