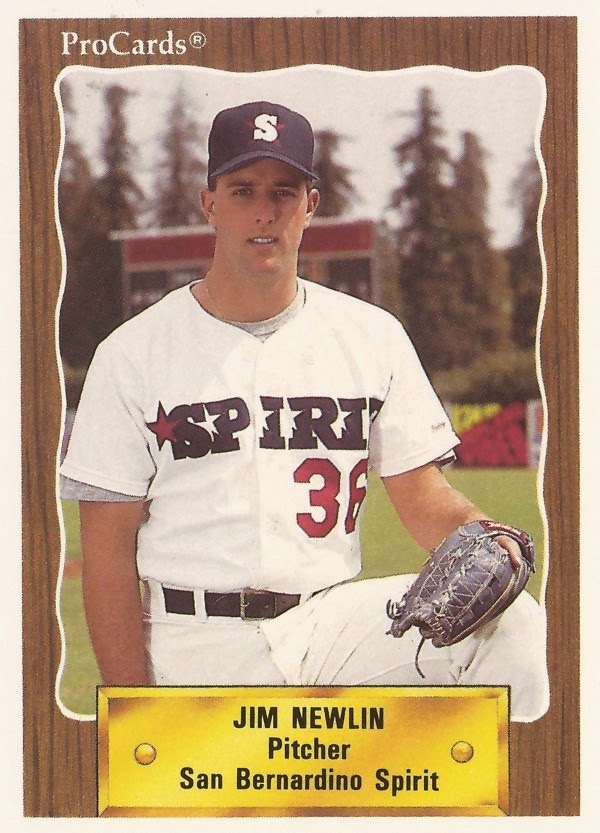 Wichita State had a 3-1 lead late in this 1989 College World Series game. They also had closer Jim Newlin, according to The Associated Press.

After Wichita State starter Greg Brummett handed the game over to Newlin, Newlin finished off rival Arkansas for the save, The AP wrote.

"I was feeling really good at the end," Brummett told The AP afterward, "but when you have Newlin at the end to slam the door, it's a great feeling."

Newlin and Wichita State went on to win the College World Series title two games later. Newlin went on that month to a career as a pro. His pro career lasted seven seasons. He never made the majors.

Newlin was taken that June out of Wichita State by the Mariners. They selected him in the 15th round.

At Wichita State in 1989, Newlin picked up 18 saves to lead the country, including three saves in Omaha. In one regional game, he faced 10 batters and struck out six of them, according to the school.

With the Mariners, Newlin started at single-A San Bernardino. He got into 19 games in relief, posting a 1.57 ERA. He also saved four games.

In July, he helped his team stay in a game. He also had a better outing than previous ones, he told The San Bernardino County Sun.

"I just felt a little more relaxed this time," Newlin told The Sun. "It was a situation with a lot less tension today. It was good for my confidence to get back out there and do the job."

Newlin returned to San Bernardino for 1990. He also made AA Williamsport. At AA for the Mariners in 1991 at Jacksonville, Newlin picked up 12 saves. over 47 appearances. He had a 2.25 ERA.

Newlin moved to the Marlins system in 1993. He played briefly at AAA Edmonton, but spent most of the season at high-A High Desert.

Newlin continued playing in the minors through 1995. He played his final season largely AA Bowie. In all, he saw time in four AAA seasons, getting into 60 games at that level and saving three. He never saw the majors.