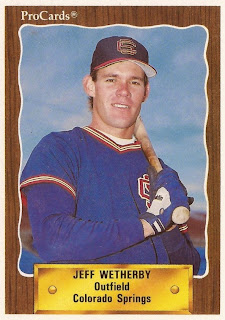 Two years earlier, Jeff Wetherby was in the majors. Now, in September 1991, Wetherby wasn't sure if he could continue.

The former major leaguer was playing then at AA Jacksonville with the Mariners. That was after losing playing time at AAA with the Orioles and essentially quitting the game, The Los Angeles Times wrote.

"The whole thing has pretty much been a brutal year for me," Wetherby told The Times. "It's been up and down the last two years, the biggest roller-coaster ride I have ever been on."

Wetherby would come back in 1992, but he still wouldn't return to the majors. His 52 games played - 48 at-bats - with the Braves in 1989 proved to be the extent of his big league career.

Wetherby's career began in 1985, taken by the Braves in the 21st round of the draft, out of the University of Southern California.

Wetherby also injured his middle finger in the second game of the 1988 season, but it didn't heal properly as Wetherby played through it, The Times wrote. "They say I'm an over-aggressive player," Wetherby told The Times, "but that's the way I've always played so I can't help it."

After starting 1989 back at Richmond, Wetherby made Atlanta in June due to an injury to Gerald Perry. He stayed up for much of the rest of the year.

By late July, Wetherby had gotten into 20 games for the Braves, The Houston Chronicle wrote. But he had yet to start. The Chronicle noted his last start was that spring.

The next spring, Wetherby found himself traded to the Indians, and starting the season at AAA Colorado. He played the season there. He moved to the Orioles for 1991, playing at AAA Rochester, finishing out the year with the Mariners at AA Jacksonville.

At AAA Calgary in July 1992, Wetherby was still looking to get back to the majors.

"It seems like light years have passed," Wetherby told The Times. "I guess I'll always remember it, but I want it back. I can play (in the major leagues) again."

Wetherby didn't get back. It was his final season. He has since gone on to a post-playing career in baseball, as a scout.

"It's interesting work," Wetherby told The Times, "and it keeps me in the game."