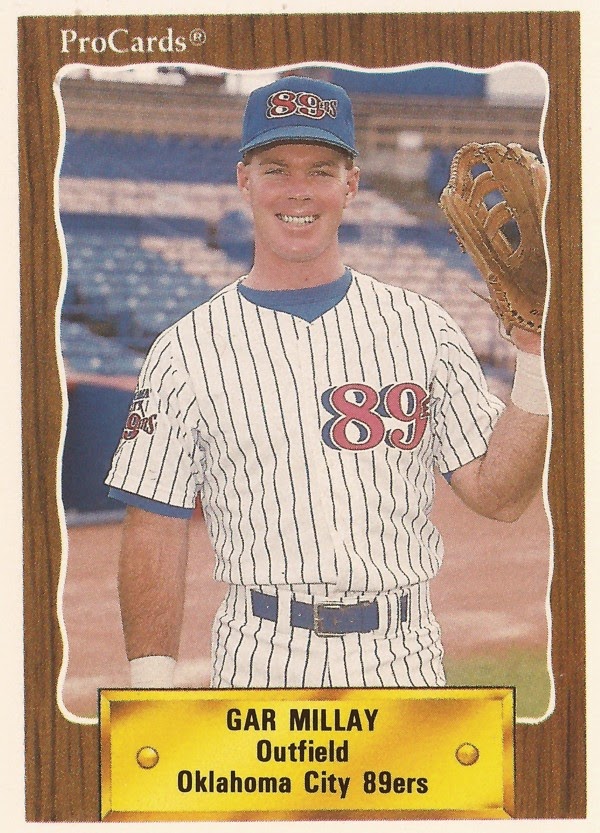 Over his three years at the University of Arizona, Gar Millay started every game. In his last game, one in which he hit a two-run home run, his team won the College World Series.

''I swear to God, I think about it everyday when I'm walking on the beach and all,'' Millay told The Orlando Sentinel in August 1986, having turned pro and signed with the Rangers. ''I think about what a lucky thing it was to have won a game like that and play on a team with those guys.''

A native of San Diego, Millay signed with the Rangers that year, taken by the team in the 28th round of the June 1986 draft. In addition to hitting that home run in the 1986 championship game, Millay hit two home runs in a regular season 1985 game.

He hit AA Tulsa for 28 games his second season, playing the rest back in the Florida State League. Between the two, he hit .261, with 13 home runs.

It was Tulsa again for 1989, then AAA Oklahoma City for 1990. He hit .257 for the 89ers that year. In June, the outfielder even tried his hand at pitching, giving up two runs in an inning of work.

Millay played for Oklahoma City again in 1991, what would be his final year as a pro. He hit just .233 over 93 games, falling short of the majors.

Millay returned to his hometown after his playing days were done, he and his wife having three children.

Speaking in January 2011, as Millay's battle with cancer went on, Millay teammate and roommate at Arizona Steve Strong recalled Millay to The Arizona Daily Star as a great teammate who would do anything for anyone.

"He was such a good ballplayer; he hit a home run against Florida State in that championship game and wasn't influenced by the pressure," Strong told The Daily Star. "He was always up to a situation of that magnitude."