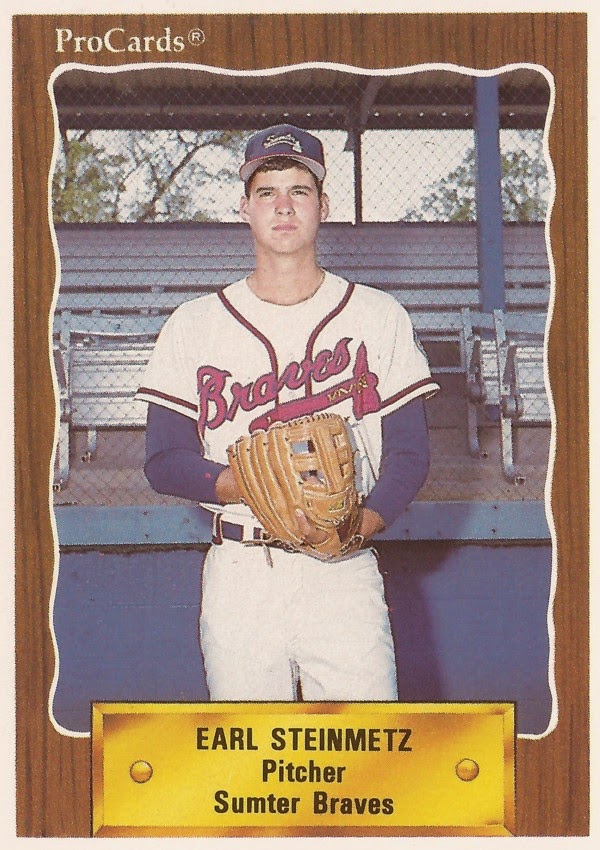 Pitcher Earl Steinmetz had just been taken out of the game in the seventh and he was upset. He wasn't upset that he was taken out so much, he was still apparently upset over a call made by the home plate umpire the inning before.

Steinmetz showed his displeasure by confronting the umpire head-on. He also slammed the umpire to the ground, according to the account published in The Norwalk Hour.

Steinmetz started off in the Braves system, taken by Atlanta in the 26th round of the 1989 draft out of Judson High in Converse, Texas.

He played that year at the Braves' rookie team in the Gulf Coast League. The right-hander went 3-2 with a 2.08 ERA in 10 appearances.

Steinmetz gave up three early runs in an April 7.1-inning outing, also striking out seven. In July, Steinmetz threw six shutout innings for his ninth win. He threw seven innings in a June game for Sumter, giving up three runs and getting a win, according to The Sumter Item.

Then Steinmetz' time in independent ball began. In 1994, Steinmetz split time between San Antonio of the Texas-Louisiana League and Lafayette, Indiana of the Great Central League.

With Lafayette, Steinmetz appeared to flash brilliance, striking out 23 Mason City batters. The outing even made it onto ESPN, according to an interview with a broadcaster years later.

What was less known, however, was that Mason City's regular players had quit after not getting paid, the batters he struck out were little more than "local farmers," broadcaster Mike Curto recalled to ESPN.com in 2002.

In 1995, Steinmetz tried a return through replacement ball, appearing in one early March game and giving up six runs in two innings, according to an Associated Press account.

Later that year, Steinmetz was with the Abilene Prairie Dogs, back in the Texas-Louisiana League. Steinmetz beaned a batter for the opposing Lubbock Crickets, touching off a brawl. It was a beanball that Steinmetz was ordered to throw, his manager admitted later, according to a wire account.

Several players were ejected, but that wasn't what caught the media's attention. It was the Lubbock mascot, who was also tossed.