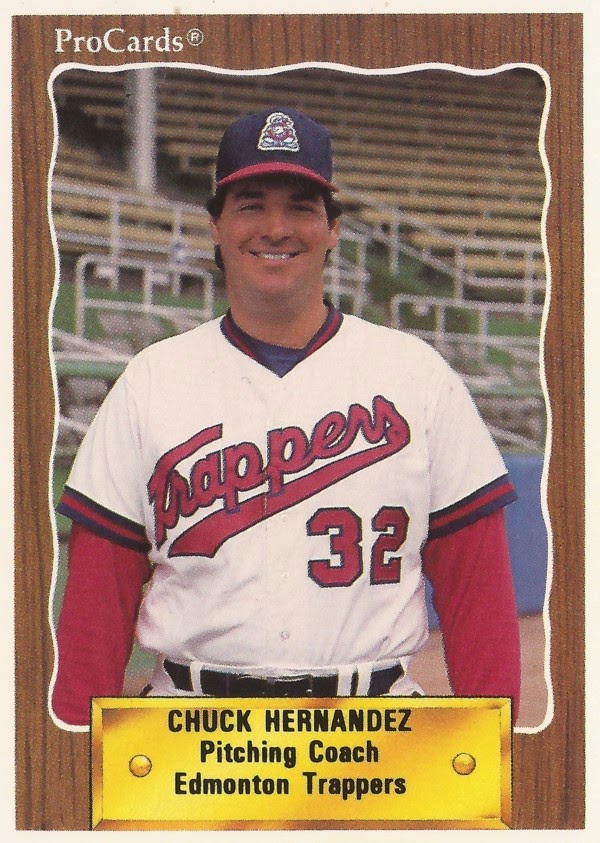 University of South Florida baseball coach Lelo Prado attempted to put his coaching hire in perspective: The hire of pitching coach Chuck Hernandez for 2011 put the "icing on the cake" of his school's Tampa-based coaching staff.

"If you're a pitching prospect in this community, a pitching prospect anywhere in America," Prado said in a university write-up, "you want to go somewhere where a guy is going to develop you and Chuck Hernandez has been doing that his whole career."

Hernandez' "whole career" includes more than a quarter century of coaching experience, including several years as a major league pitching coach for the Angels, Devil Rays and Tigers.

That coaching career also came after a brief playing career, that saw Hernandez pitch five seasons in the minors, before an arm injury cut his playing career short.

That playing career began in 1978 when the Tampa native was taken by the Yankees in the first round of the draft out of Hillsborough Community College.

He pitched his first year at single-A Fort Lauderdale, going 5-7, with a 2.56 ERA. In the Florida Instructional League that fall, Hernandez was one of three to take part in a seven-inning no-hitter.

Hernandez' playing career, however, never really got off the ground. It wasn't until 1983 that he saw time above single-A. Then it was five starts at AA Nashville. That was also his final season, an elbow injury forcing an end, his CMC card reads.

His coaching career started shortly afterward, with a turn as pitching coach for the Gulf Coast White Sox in 1985, then moving to the Angels at single-A Palm Springs in 1986.

Hernandez made coach at AA Midland in 1987, then AAA Edmonton in 1988. In 1992, he made coach with the Angels in California. He became bullpen that year after the Angels 1992 bus accident that changed around duties, The Los Angeles Times wrote. That November, Hernandez was named the top pitching coach for 1993.

"It's a very good situation. It's a good staff," Hernandez told The Times. "It'll be very challenging."

That first year Hernandez watched over a pitching staff that included Mark Langston and a young short-term major leaguer Hilly Hathaway. Hathaway got 11 starts, one of them a 4-1 August win.

"He's certainly not a flame-thrower, and he doesn't knock out your eyes with any of his pitches," Hernandez told The Times of Hathaway, "but he wins. He's won at every level we've put him. And that's the bottom line."

Tampa manager Lou Piniella called Hernandez the most qualified candidate for the job after hiring him. Piniella also noted Hernandez' work with the young Tampa pitchers.

After the Devil Rays, Hernandez joined the Tigers for 2006, helping them to the World Series.

Going into that campaign, Hernandez told MLB.com there were similarities between the Tigers and Devil Rays staffs, namely the young arms.

"I'm coming to a place that's not in shambles," Hernandez told MLB.com. "The Minor League system, I've looked all through that. These were young pitchers in Detroit over the last few years. I'm not going to come in on some white horse thinking I have to fix this hotel. We're going to work every day, striving to get better."

His stay in Detroit was three seasons. Then came one as the Indians' bullpen coach for 2009. He joined the University of South Florida after a year as a coach for the Gulf Coast Phillies. He's since become pitching coach for the Marlins, continuing with that through 2014.