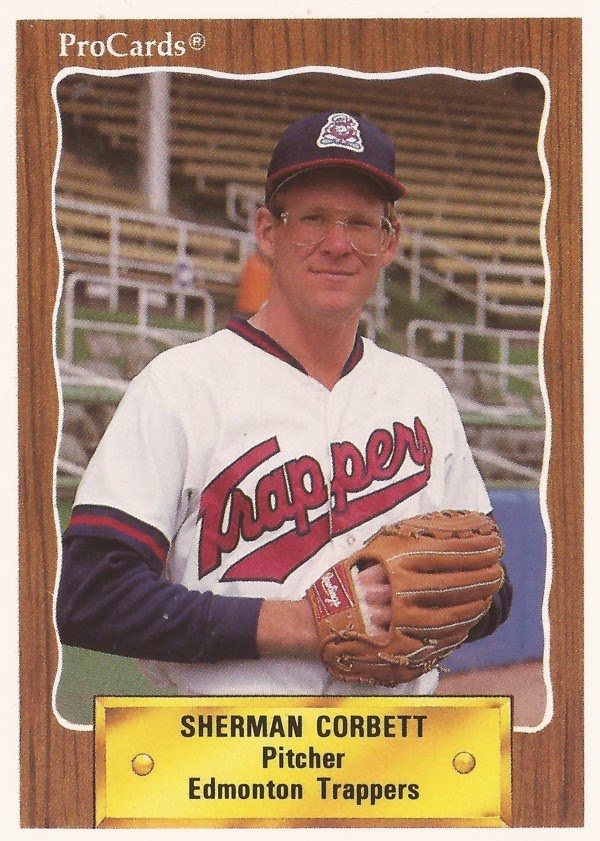 While not stellar, Sherman Corbett's debut with AA Orlando was worthy of praise. The lefty pitched 5.1 innings, giving up eight hits and got the win.

"Sherman is what you would call a crafty left-hander," Orlando Cubs manager Tommy Jones told the Orlando Sentinel in July 1993, "and tonight he was very tough on their lefties."

By 1993, Corbett was already three years on from his last major league appearance, with the Angels. It would be his final year in professional baseball, he would not return to the majors.

Corbett's pro career began in 1984, drafted by the Angels in the third round. He made AA Midland in 1986 and AAA Edmonton in 1987. He made spring training that year, working with Stewart Cliburn to shut out the Giants for nine innings in one game.

Corbett was also the subject of an apparent malapropism from Angels announcer Ken Brett that year. After Corbett finished warming up, according to The Los Angeles Times, Brett commented "Well, Sherman Corbett has finished throwing up in the bullpen."

Corbett added four more appearances each in 1989 and 1990 for the Angels and his major league career was done. He remained with the Angels system through 1991, then went through the Tigers system before ending with the Cubs.

Since 2001, Corbett has been the head baseball coach at the University of Texas at San Antonio.

Earlier this year, Corbett's Roadrunners rallied for three runs in the ninth to take a game with Houston and end a six-game losing streak.

"This was a huge victory for us," Corbett said in a university athletics article after the game. "Not only did we end a long losing streak, but more importantly, the guys showed a lot of heart and never gave up. I cannot begin to say how proud I am of the effort they showed out on that field tonight, especially in the ninth inning."