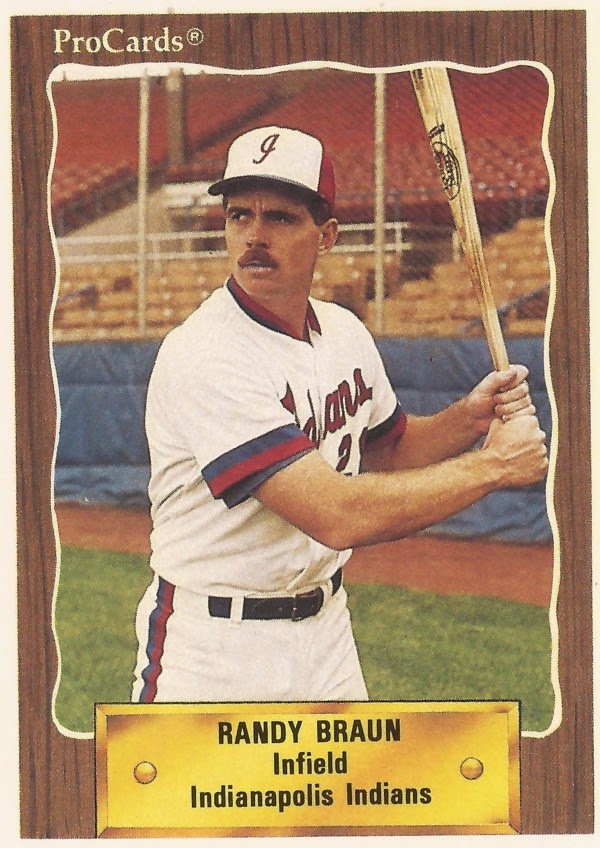 Cuts were coming and Randy Braun knew one could be him. And he told that to his friend and Indianapolis Indian teammate Steve Fireovid.

"I'd be foolish not to think I could be one of the the people they let go," Braun told Fireovid May 22, 1990, according to Firevoid's book The 26th Man.

Braun's fears came true the next day. "So Randy's not foolish," Fireovid wrote in his diary account of his 1990 season at Indianapolis, "but he's also not a ballplayer anymore."

It was the end of the road for a career that lasted 10 seasons, all without making the majors.

Braun's professional career began nearly a decade earlier, taken by the Astros in the 12th round of the 1981 draft out of Missouri Southern State University.

Braun spent his first years in the low minors, including with the Florida State League's Daytona Beach Astros in 1983.

With Daytona, Braun won a June 14, 1983 game with a two-run, 10th-inning home run. It was that same year that Braun hit a home run that was debated as the longest hit at Chain O' Lakes Stadium in Winter Haven. It was estimated at as much as 480 feet.

Braun was promoted to AA Columbus in 1984, but struggled with a .216 batting average and returned to Daytona. His average recovered to .271 back at single A.

It was his last year with the Astros system. For 1985, Braun was with the Mariners, playing at AA Chattanooga, his first of three years with the Seattle system. Braun hit .314 at AA, earning a promotion for his next two years to AAA Calgary.

Then, in 1990, he was anticipated to be the Indians first basemen, until a new acquisition and injury headed that off, according to Fireovid's book. Braun sprained his ankle, leaving him on crutches.

In all, Braun played in just 23 games for Indianapolis in 1990, his final year in the minors, hitting just .221. Braun would return to his off-season accounting job.

Braun understood changes had to be made, Fireovid wrote.

"I wouldn't have left my accounting firm and family for six weeks of spring training with no pay if this wasn't what I wanted to do," Braun told his friend Fireovid. "I understand it, though. That's baseball."