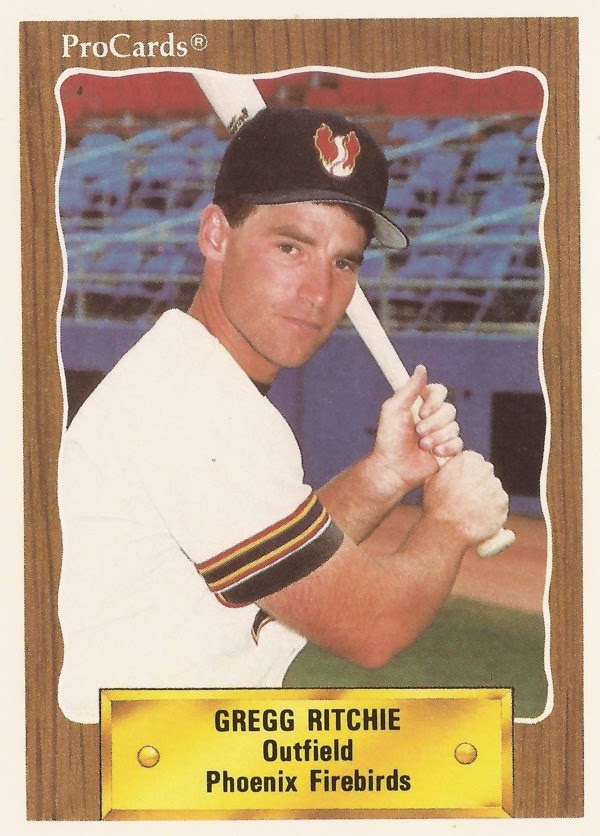 A series of injuries hit the Giants' outfield and Gregg Ritchie saw the possibility of an opening.

That opening had already allowed Ritchie to play in some of the final exhibition games of the spring.

"It can't hurt to be there," Ritchie told his hometown Fredericksburg Free Lance-Star early that April. "I'm in a prime position to maybe stay. Weirder things have happened."

For Ritchie, though, weirder things that led to the majors never happened - as a player.

Ritchie played in a total of eight seasons as a professional, including spending time in Mexico, but he was never called up to the majors. Ritchie, though, has since made it to the bigs, as a coach with the Pirates.

Ritchie's career began with promise, taken by the Giants in the eighth round of the 1986 draft out of George Washington University. In college, Ritchie's coach believed Ritchie had the speed to be a major leaguer.

"He can go with anybody in the major leagues," GW coach Jim Goss told The Free Lance-Star in May 1984. "He has run even with track sprinters without any coaching in running - without working on mechanics. He's got wheels like I've never seen."

Richie began his professional career at short-season Everett. That year, he hit .250, with 18 stolen bases. He moved to single-A Clinton for 1987, hitting a much better .337, with 41 swipes.

To The Free Lance-Star, Richie called his season in 1989 a humbling year. He'd never had statistics so low.

"It was a year where, if I didn't believe in my ability, I might have gone right down the toilet," Richie told The Free Lance-Star.

Richie spent his 1990 season at AAA Phoenix, unable to get a call up to San Francisco. His stats, though, stayed low. He hit .237 at Phoenix, with 23 stolen bases.

By the end of 1991, another year spent in the minors, Giants brass still saw potential in Richie. Maybe not with them, though.

"I think Gregg has a chance to get to the major leagues," Giants director of minor league operations Tony Seigle told The Free Lance-Star in October 1991. "He'll get a chance. If it's not with us, it will be with someone."

But the result was the same in 1992, another year at Phoenix. That off season, Ritchie even thought a change of position might do him good. The outfielder thought about pitching. He then went to Mexico.

After a handful of games at AAA Oklahoma City in 1995, Ritchie's playing career ended. His coaching career, though, soon began.

In 1996, Ritchie served as hitting coach at rookie Bristol. After serving in successive hitting coach positions through 2005. In 2003, it was at AAA Charlotte, with the White Sox.

"One of the biggest things I let you do is hit," Ritchie told The Free Lance-Star in July 2003. "I let you show me what you can and can't do. ... When you're struggling, you don't want to hear negativity. As long as they know you're in their corner, they'll listen."

For 2006, Ritchie signed on with the Pirates as a roving hitting coordinator. For 2011, Ritchie finally made the majors, as hitting coach in Pittsburgh, trying to better the team's league worst batting average from the previous year.

"Has to get better, just has to," Ritchie told The Pittsburgh Post-Gazette in February 2011. "That's part of my job. We have to have a disciplined aggression to make it get better."