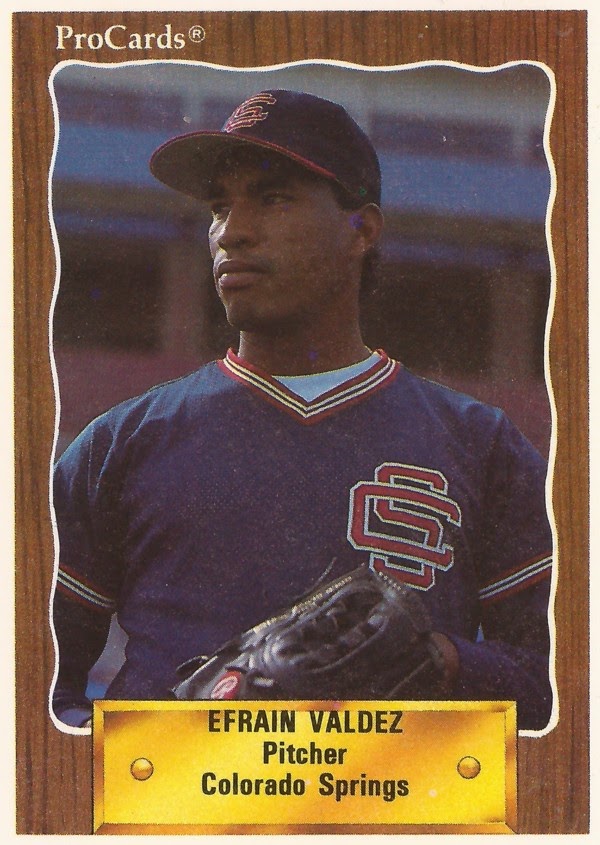 Efrain Valdez thew a fastball for the Diamondbacks and the Padres got a home run. Later, Valdez told reporters he wouldn't have thrown a different pitch in that situation, according to The Chicago Tribune.

"I'm not going to come in from the bullpen for the first time in seven years and throw a breaking pitch," Valdez told reporters.

It was Valdez' first major league pitch since 1991, when he was with the Indians. In the meantime, he'd pitched in the minors, in Mexico and even Taiwan. Later, he'd even pitch in Korea.

His playing career wouldn't end until 2003, after two decades in the pros and 26 major league appearances.

Valdez' career began in 1983, signed by the Padres as a free agent. He played that year and the next at short-season Spokane. In 13 appearances each season, his ERA hovered around 7.

In July 1984, Valdez told The Spokane Spokesman-Review about the difficulties of playing in the United States, not knowing the language. Valdez grew up in the Dominican Republic.

"It's hard to meet people because you don't know the language. They can't talk to you and you can't talk to them," Valdez told The Spokesman-Review through an interpreter. "Last year was harder. This year when I came back, people knew me and called my name."

Valdez is not credited as pitching in 1986. He returned for 1987 with the Rangers organization, at AA Tulsa. By 1989, he was with the Indians at AA Canton, taken in the Rule 5 draft. In 1990, he started with AAA Colorado Springs.

By that August, Valdez was with Cleveland. With the Indians, Valdez pitched in 13 games, posting an ERA of 3.04.

In one August outing, he walked two. In late September, he gave up the game-winning hit. That same month, Valdez went three innings, didn't give up a hit and got his only major league win.

He returned to Cleveland for seven more outings in 1991, getting six innings of work, and giving up one run. That July, the Blue Jays took him off waivers. He pitched the rest of the year at Syracuse and the next with the Brewers at AAA Denver.

He didn't return to a stateside field until 1998, signing with the Diamondbacks. With Arizona, he gave up that first-pitch home run. He then only went 4.1 innings over six appearances. He gave up two earned runs, both home runs.

After going to Korea in 2001, Valdez finished out his career with two seasons in Mexico.