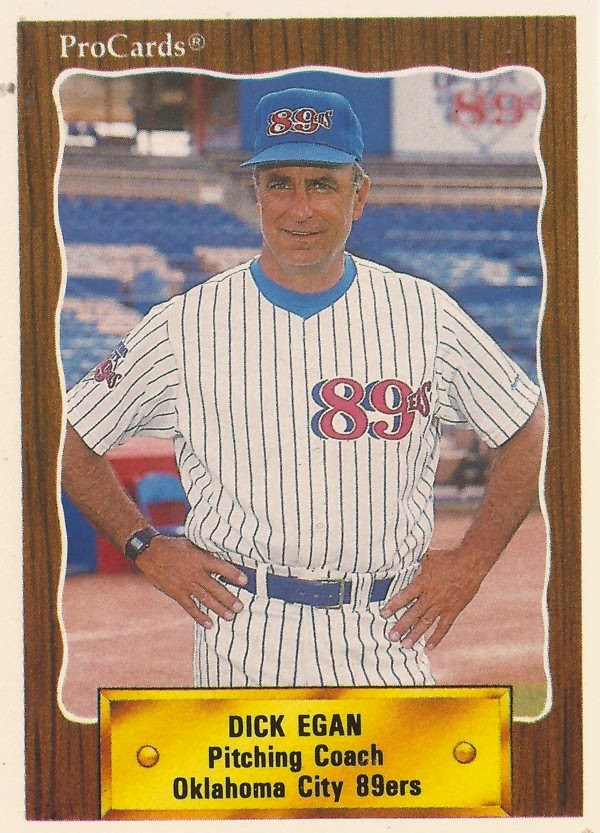 Bobby Witt hadn't had problems for long, his first start of 1989 was a bad one. But Rangers bullpen coach Dick Egan had a quick, if somewhat unorthodox fix.

"Dick Egan kept telling me I was throwing the ball like a girl," Witt told The Milwaukee Journal after his next outing, a stellar one, against the Brewers. "He kept getting after me. I was just throwing it, no grunt."

From pitchers Witt and Kevin Brown to Kenny Rogers, Egan played roles in either their development or getting them on track. In the years since, he has switched his focus from talent developer to talent evaluator.

Egan joined Oklahoma City in 1990 as pitching coach, after two years as the bullpen coach with the big club in Texas. He was previously a roving minor league instructor in the Rangers system.

Egan's coaching days came after a 12-season professional playing career that led to parts of four seasons pitching in the majors with the Tigers, Angels and Dodgers.

During his time as bullpen coach, Egan watched the development of Brown.

"Of all the guys on the staff, Kevin's the least likely to put extra pressure on himself," Egan told the Associated Press in a 1989 article. "And that's one of the things that's going to make him great."

For 2008, Egan was promoted to special assistant to the Tigers' GM Dave Dombrowski.

“Dick has done an outstanding job for us over the years,” Dombrowski told The Detroit Free Press in October 2007. “This job will take full advantage of his evaluation skills.”

The MLB.com account included praise from Rogers, handed out in the Tigers' 2006 World Series year.

"I can't overstate the importance they had on my career, can't do it," Rogers was quoted of Egan and former pitching coach Tom House. "But it was mainly for the confidence and the faith they put in me early on. I mean, they even saw talent when I didn't really see it or know what I was going to be capable of doing."