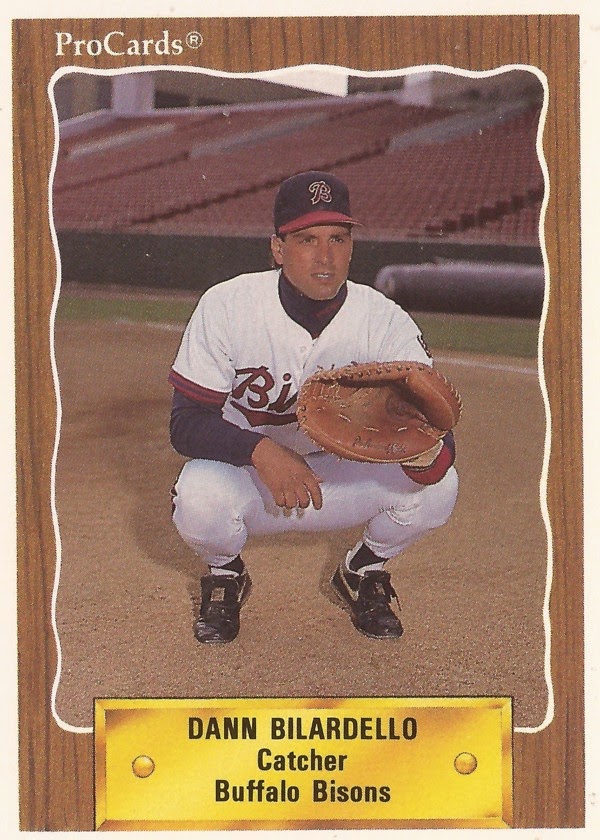 In his seventh major league game, Dann Bilardello knew instantly this moment was big. But the rookie catcher was careful to show the proper respect.

He had just hit his first major league home run, off no less a pitcher than Tom Seaver.

"This was a great moment in my life; hitting one off a future Hall of Famer is another bonus for me," Bilardello told reporters after the game. "I knew it was out when I hit it, but I didn't stand there and watch it. I didn't want to show up Tom."

Bilardello was at the beginning of his rookie season with the Reds. The catcher played in 109 games that year, ending with nine home runs, but hit just .238. Bilardello would go on to play in parts of eight major league seasons, but never more than that year in 1983.

Bilardello made the majors that year, having been taken by the Reds out of the Dodgers system the previous December. Bilardello was drafted by the Dodgers in the first round of the 1978 June draft.

With the Dodgers' system, Bilardello had some power. He hit 21 home runs for single-A Lodi in 1981, his 16th to tie a July game at one. He earned a promotion to AA San Antonio that year, but got no higher.

Taken by the Reds for 1983, Bilardello made an impact. On July 8, Bilardello was credited with hitting in the go-ahead run with an infield single. In an Aug. 26 game, Bilardello got three hits, one of them a home run in a 7-3 win over the Whitey Herzog's Cardinals.

Bilardello's August showing against St. Louis stood as proof for Herzog that Bilardello could hit, or at least hit fair. Stepping into the batters box as a pinch hitter June 1, 1983 against Herzog's Cardinals, Bilardello didn't step back out again until taking 13 pitches and sending them foul. He finally hit one fair, directly at the third baseman, who threw him out.

"Dear Whitey," Bilardello wrote to the Cardinals manager after the game, according to a wire account. "Please don't send me a bill for the balls. I don't make that much money."

After that year, Bilardello saw his playing time steadily decrease. By 1985, he played in 42 games for the Reds, hitting just .167. The team traded him to Montreal in a five-player deal that off-season, playing in 79 games for the Expos in 1986, hitting .194.

But it wasn't really his bat that teams were interested in, it was his glove. By 1989, Bilardello was with the Pirates system, having failed to make the majors in the previous two seasons. He played in 32 for the Pirates that year. He spent September as the Bucs' backup catcher, then was released. But he was upbeat.

"If they don't make a deal for a right-handed hitting catcher, I think I could make the Pirates next spring," Bilardello told the Beaver County Times that November. The Times also noted that the Santa Cruz, Calif., native and his family road out the San Francisco earthquake the previous month without injury.

Bilardello did return to the Pirates for 1990, spending most of the year at AAA Buffalo. But he did get 19 games in Pittsburgh. For 1991, he signed on with the Padres, playing in 15 games that year and 17 the next, his final year as a professional player.

That spring in 1992, Bilardello was fighting for a spot with the Padres. He was, by then, considered "an excellent handler of pitchers," according to The Los Angeles Times.

Almost 33, Bilardello's approach that spring was simple, according to The LA Times: Do what was asked of him and don't worry about things beyond his control.

"Whatever decision they make I'll be happy," Bilardello told The LA Times. "They know the job I did last year, they know what I can do."

His playing career done, the former catcher has gone on to a career as a manager and coordinator. From 2002 to 2004, he managed in the system of the team that drafted him, the Dodgers. After a season with the Red Sox system, Bilardello joined the Cardinals as minor league catching coordinator.

For 2010, was assigned to the Cardinals' short-season affiliate in Batavia, NY, watching over his players and, presumably, the supply of baseballs.