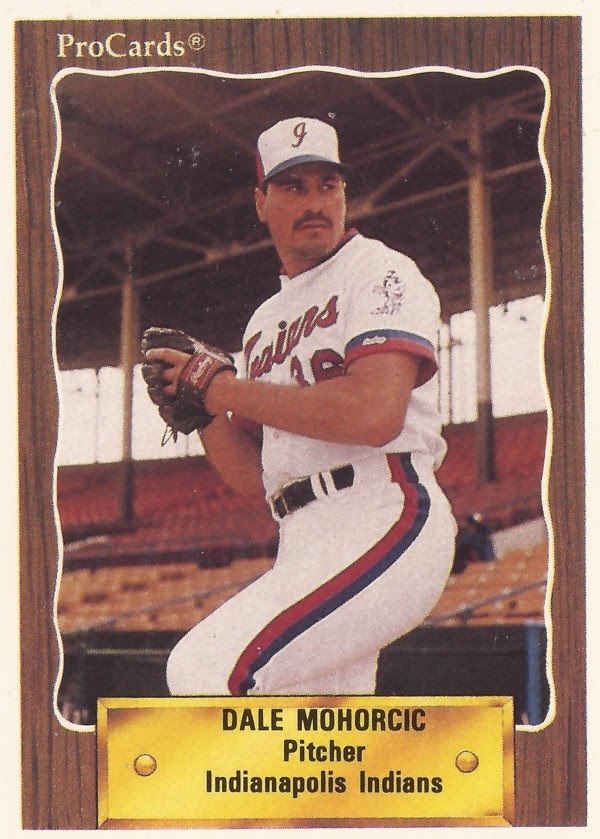 Dale Mohorcic didn't think anybody would confuse him with the game's top closers. But, in a three-month stretch in July 1987, he might have been.

From May to July that year, Mohorcic picked up 11 saves, along with five wins for the Rangers. He also posted a 1.66 ERA, according to The Associated Press.

"I don't think I'm a main stopper that everybody recognizes," Mohorcic told The AP in late July. "I just do it quietly, nothing spectacular."

Mohorcic never did really take his place as a top closer. But he did put together a career that spanned five big league seasons, getting over 50 appearances in three of those years.

Mohorcic first made the majors in 1986, his ninth season in pro ball. He first played professionally in 1978, for independent Victoria of the Northwest League. A 6-5 record in 12 starts got Mohorcic a contract with the Blue Jays.

With Toronto, Mohorcic pitched at single-A Dunedin. He went 4-7 with a 4.42 ERA there, and then got his release. Signing with the Pirates for 1980, Mohorcic played the next five seasons with them. He first hit AAA in 1981, at Portland, getting back to AAA for parts of 1983 and 1984 at Hawaii.

Granted free agency for 1985, Mohorcic didn't sign with a team until that May, signing with the Rangers. He played that year at AAA Oklahoma City. The next year, he made Texas.

Mohorcic debuted with the Rangers May 31, going on to get into 58 contests for Texas, posting an ERA of 2.51. He became such a regular for the Rangers that in August, he ran off a string of 13-straight relief appearances, tying the record.

"I'll take it," Mohorcic told The AP of tying the record. "It's something only one other guy has done, so that's something."

With durability like that, Mohorcic earned the nickname "Horse." And he continued that durability in 1987, getting into 74 games. His ERA also stayed under 3, at 2.99, and picked up 16 total saves.

By 1988, though, Mohorcic's relationship with the Rangers had soured, according to The New York Times, with Mohorcic becoming a "forgotten relief pitcher." Then came a trade to the Yankees for September.

''Just being in this uniform makes me feel like a better player,'' Mohorcic told The Times. ''I want to come to the park and play. In Texas, I was down all the time.''

Mohorcic played in two more seasons, getting into 32 games with the Yankees in 1989 and 34 with the Expos in 1990, ending his career.