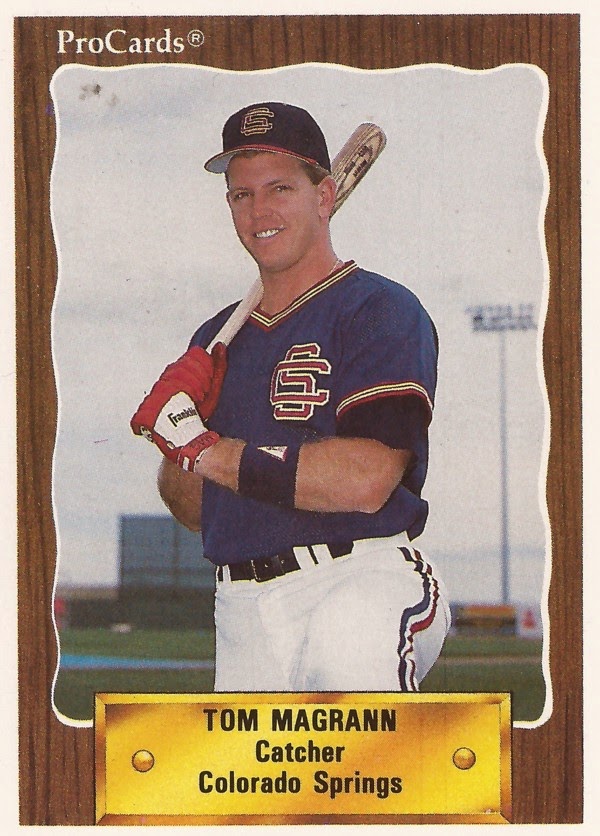 The Albany-Colonie Yankees tried to run, but Tom Magrann was there to stop them.

In one late July game in 1989, the A-C Yankees tried to run on the catcher Magrann twice in the seventh inning. Magrann caught both runners stealing. It was a game Magrann's AA Akron-Canton Indians won by a score of 4-2, The Schenectady Gazette wrote.

By September, Magrann was getting opportunities to throw out runners at a higher level, in the major leagues. In a career that spanned nine professional seasons, those opportunities, it turned out, would be his only ones in the bigs.

Magrann's career began back in 1982, signed by the Phillies as an amateur free agent. His first playing time came the next season, at rookie-league Helena. There, the catcher hit .220 with two home runs.

Magrann stayed with the Phillies system for three years, never getting above single-A. In 1984, at single-A Spartanburg, Magrann hit .222 with another two home runs. One of those home runs came in a May 16 game, it was a grand slam.

He started 1988 still recovering from a broken leg suffered the previous year, The Associated Press wrote. That helped limit his 1988 season to just 27 games. For 1989, the Orioles traded Magrann to the Indians, the team that would eventually bring Magrann to the majors.

Magrann played 1989 at AA Canton. There, Magrann hit .246, with four home runs. He also got that September call-up to Cleveland.

Magrann debuted Sept. 7 against the Blue Jays in a late-game substitution. He got one at bat, without a hit. Magrann would go on to get a total of 10 at bats in nine appearances, never getting a hit.

Defensively, Magrann caught at least one runner stealing, throwing out Dave Gallagher in the fourth inning Sept. 30. Ten days earlier, in what perhaps could be understandable, given the base stealer, Magrann failed to nab Hall of Famer Rickey Henderson in four attempts.

Magrann played two more seasons, playing 1990 with the Indians at AAA Colorado Springs, then 1991 between AA and AAA in the Pirates and Red Sox organizations, ending his affiliated career.

Magrann, though, continued playing, heading to Belgium to do so, according to The New York Times. Brought to Europe by a friend, Magrann won the 1992 Belgian league Triple Crown.

More recently, Magrann has returned to his home state of Florida, serving for 2011 as assistant baseball coach at Coral Springs Charter.