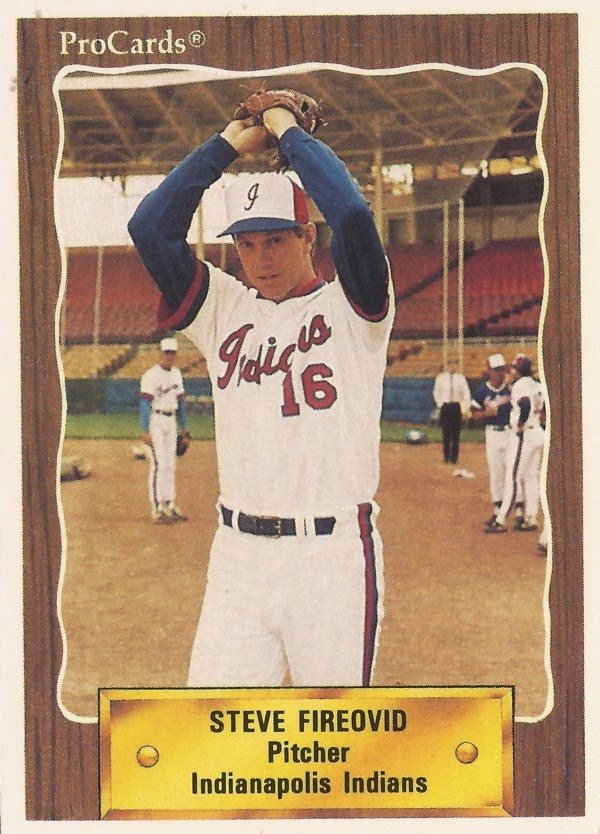 Steve Fireovid assessed the state of his career to The South Florida Sun-Sentinel in spring 1992.

He was entering his 15th season as a pro. He'd made the majors in parts of five of those seasons. But he hadn't been to the bigs since 1986, playing since then exclusively at AAA. One of those years he'd even chronicled for his own book.

"Depending on the mood I'm in," Fireovid told The Sun-Sentinel, "I think that shows a certain level of determination. Other times, I think it shows a lot of stupidity. Either, 'This guy perseveres,' or 'This guy's an idiot.'"

He was working to get back to the majors that spring with the Rangers. And he did. For three final outings, 6.2 innings of work. He also got one win, pushing his career total to three.

Fireovid's career began nearly a decade and a half earlier, in 1978. The right-hander was selected by the Padres in the seventh round of the draft, out of Miami University.

That was also the year he first hit the majors, as a September call up with the Padres. In five outings, four starts, Fireovid went 0-1, with a 2.73 ERA.

His first outing came in relief. Asked by his hometown Bryan Times the next January if he was nervous, Fireovid noted the team was already well behind in the standings. There was no pennant race to worry about.

"I wasn't really as nervous as I thought I might be," Fireovid told The Times. "I really don't know how to describe that - it's something I'd been working for for a while, so it wasn't logical that I'd get nervous."

Fireovid spent 1982 back at AAA. He returned for three more outings in San Diego in 1983, giving up one earned run in five innings. That October, he was traded to the Phillies.

He got into six games for Philadelphia in 1984, giving up another one earned run in 5.2 innings. He signed with the White Sox in 1985 and got into four games and seven innings.

Fireovid saw his most major league time in 1986, with the Mariners. He got into 10 games, one a start. And he picked up his first two major league wins.

He warmed up for those outings at AAA Calgary. There, in May, Fireovid threw a complete-game, shutout against a AAA Hawaii squad that included a young Barry Bonds.

"He must have thrown 98 percent fastballs," Bonds told The Calgary Herald of Fireovid. "He did the right thing by sticking by it. He pitched super."

Those nerves Fireovid didn't really have in 1981 came out in June 1986. But he handled them, going 2.1 innings in his first appearance of the year, and getting his first major league win.

"I would be lying if I said that I had nerves of steel today," Fireovid told The Associated Press, adding later, "I felt better as the innings progressed."

His one start on the year, first since 1981, came in late August. It was also abbreviated by a torn nail.

From there, Fireovid played with Toronto at AAA Syracuse in 1987, with the Royals at AAA Omaha in 1988 and 1989. He then signed with the Expos, playing the 1990 season at AAA Indianapolis.

It was that season at Indianapolis that Fireovid chronicled in his book "The 26th Man: One Minor League Pitcher's Pursuit of a Dream." In the book, Fireovid writes of his life in the minors, and the life of a veteran watching younger players move up while he stayed put.

In June, Fireovid wrote that his "slim chance of returning to the majors was greatly diminished" that June 15. The Expos wanted the younger Chris Nabholz in the rotation. Fireovid had to move.

"I guess I felt sorry for myself for a little while," Fireovid wrote for that day, "but I'm trying to fight it. The game is bigger than any individual. I've known that for a long time. Maybe I needed to be reminded."

For 1991, Fireovid signed with the Pirates, playing at AAA Buffalo. In July, he spoke with The Toledo Blade about his book and the prospects for his career, then still waiting for a return to the majors.

"What sustains me is my faith and my family," Fireovid told The Blade. "There's a handful of guys in every organization like me. But unless I can get to Pittsburgh and spend a great deal of time there this season, this is it."

But it wasn't it. He never got to Pittsburgh, but he still had two more seasons, and three more major league appearances to make. Those three appearances all came in April 1992. The final one came April 14.

Fireovid has since returned to his hometown of Bryan and has done work with a local community organization, Community Advocates for Healthy Families, promoting closer families.