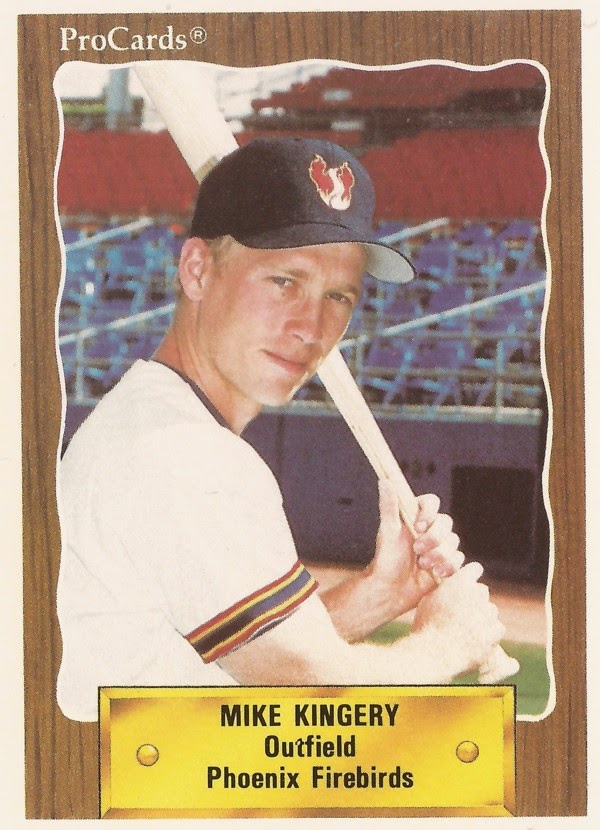 Mike Kingery went undrafted in 1979, but he was soon spotted - playing American Legion ball in Minnesota. Royals scout Art Stewart watched and liked the way Kingery swung the bat, Stewart recalled to The Lawrence Journal-World in 1985.

Stewart was soon on the phone with the Royals front office.

"I told them I'd seen a kid who would be a project," Stewart told The Journal-World that year, "and we signed him on the spot."

Kingery did turn out to be a project for the Royals, he didn't make AA until 1984, but he did make the majors. And he went on to a decade-long major league career.

Kingery first made the majors in 1986, for the Royals, seven years after he was initially signed. But his stay in Kansas City would be brief, a harbinger of the rest of his career.

Kingery played 62 games for the Royals in 1986, hitting .258 with three home runs. That off-season, the major league moves began. The Royals sent him to the Mariners in a package for Danny Tartabull. In May 1987, Kingery helped the Mariners beat his old club with a two-run double.

"It's nice for me personally to play everyday," Kingery told UPI after the game, "but you've got to go out and show what you have."

For 1990, Kingery signed with the Giants. He started the season at AAA Phoenix, then made San Francisco by the end of May. In June, the outfielder watched a possible Trevor Wilson no-hitter go by the boards in the ninth with a bloop single.

"It was the most helpless feeling in the world," Kingery told The Los Angeles Times afterward. "As an outfielder, I would have dove at anything trying to preserve it, but there's nothing you can do on a ball like that."

In May 1995, Kingery's three RBIs helped the Rockies to a win over Greg Maddux and the Braves. "I have to tip my hat to Kingery," Maddux told reporters afterward. "He nailed a pretty good pitch."

By 1996, Kingery signed a two-year, $1.5 million deal with the Pirates. He played one year, getting into 117 games for Pittsburgh ending his career after 10 seasons.

Speaking about the signing to The Sarasota Herald-Tribune Pirates Manager Jim Leyland credited Kingery's defensive skills with keeping his career going through so many stops.

"In his particular case, it's a compliment that he's bounced around," Leyland told The Herald-Tribune. "This is a guy that can usually fit in on a club anywhere pretty good. (Managers) are always looking for that type of player."