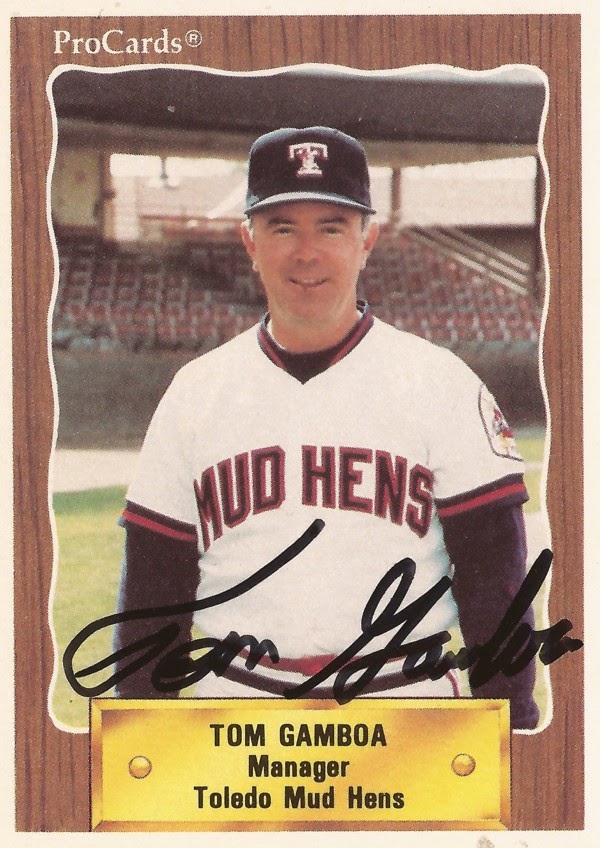 When the Orioles came calling and offered Tom Gamboa his first pro job, one as a scout, he recalled having mixed feelings.

He was looking forward to the idea of being in pro baseball full time, but he wasn't sure it would be the best fit for him.

"I knew deep down, with my personality being extraverted, that I would be a better teacher and coach on the field instead of off the field evaluating the talent," Gamboa recalled recently to The Greatest 21 Days.

But, he said, he also looks back and he's glad he started as a scout.

"It taught me how to evaluate players," Gamboa said, "and it prepared me for my coaching career, which came later on."

Gamboa spent the better part of his first decade in the pros as a scout for the Orioles and the Brewers. With the Brewers, he transitioned into a minor league hitting instructor and, finally, to managing.

He's been in the game almost continuously since, serving in various roles, including five seasons spent in the majors as a coach with the Cubs and the Royals.

But it's managing, he said, that he's loved the most.
Gamboa spoke to The Greatest 21 Days recently at Joe Bruno Stadium in Troy, NY, where his Brooklyn Cyclones were visiting the Tri-City Valley Cats. Gamboa served as manager of the Cyclones in 2014.

Sitting at the top of the Bruno Stadium stands, Gamboa covered his youth, growing up and learning the game from his father. When he didn't make it as a player, he continued in the game as a coach and scout until he finally made the majors.

Gamboa also recalled the moment in 2002 that he became the symbol of fan violence, attacked on the field. He was blindsided by a father and son during a game in Chicago. Briefly knocked unconscious by the assault, Gamboa recalled coming back around by a punch to his jaw.

Gamboa's first stint as a pro manager came at rookie Butte in 1979, serving there in an interim basis. His first full-time job heading a team then came in 1983 at rookie Paintsville.

The transition from scouting and instruction to managing was an easy one, Gamboa recalled. In the second of his two seasons of pro ball in Canada, he'd been pressed into service as a player-manager, getting his first taste of making managerial decisions.

He knew right away, he recalled, that he had found his niche.

"I found out early in my coaching career," Gamboa said, "although I wish I'd have been a better player, I found out that my gift everywhere that I've been has been I've been able to take 25 players from different ethnic, racial backgrounds, religious backgrounds, I've had a gift to be able to bring everybody together to play for the common good, which is the team."

Gamboa spoke as his team of Brooklyn Cyclones played down the stretch of the New York-Penn League season fighting for a playoff spot.
Though he felt he best fit in as a manager, Gamboa didn't stay in that role. From 1983 to 1999, a time that would lead him to the majors as a coach, he only got to manage six minor league teams, including AA Glens Falls in 1987 and AAA Toledo in 1990.

In between, he was a minor league field coordinator for the Tigers and Cubs and director of minor league instruction with the Padres.

Gamboa recalled filling all his different roles as not being tough, but actually beneficial.

When the Tigers offered him the job of minor league field coordinator in 1987, he didn't even know what the job was. It was a new job and the description he got was that the coordinator was like a high school principal.

Gamboa's job was to use his thoughts and influence on each of the organization's managers and coaches to unify the instruction of players.

"I loved the challenge of it and I loved the traveling around to see AAA, AA, high-A, low-A and rookie league and the differences and getting to know all of the players and being a leader," Gamboa said.

"That part of it was fun," Gamboa said. "But I missed the day-to-day battles of managing and taking a team from April to August and trying to win a pennant."

He'd be in and out of a city in five days, instead of being with the team through the whole war, Gamboa said.

That's when, he said, he started spending his winters in Puerto Rico. Gamboa, who is bilingual, managed the team in Mayaguez for seven winters, winning six league championships.
"I was able to fulfill my managerial aspirations down there and manage a lot of big league players while in the states I spent basically the whole decade of the 90s being a field coordinator," Gamboa said.

As the 90s neared a close, Gamboa took on a new role, that of major league coach.

After all his time spent in the minors in various roles, Gamboa's first major league offer came on the same day as his second.

He recalled the Cubs, the organization he was with at the time, offering him the job as major league third base coach. The same day, the Royals came calling and offered him a major league hitting coach job. Gamboa chose the Cubs, accepting manager Jim Riggleman's offer

Gamboa turned 50 that February in 1998 and he was fulfilling his personal goal of making the big leagues. It was a goal he didn't get near as a player. He called it a thrill.

With the Cubs, Gamboa got to have a better-than front-row seat to the 1998 home run chase. Gamboa got to see all of Sammy Sosa's 66 home runs and Mark McGuire's record-breaking 62nd. He called that race exciting to watch.

Four years later, Gamboa was back in Chicago, this time coaching first base at new Comiskey Park with the visiting Royals.

This game was anything but exciting. To anyone watching, it was downright scary as Gamboa instantly went from coaching first to having to defend himself against an assault by two people who came from the stands. (Continue to Part 3)