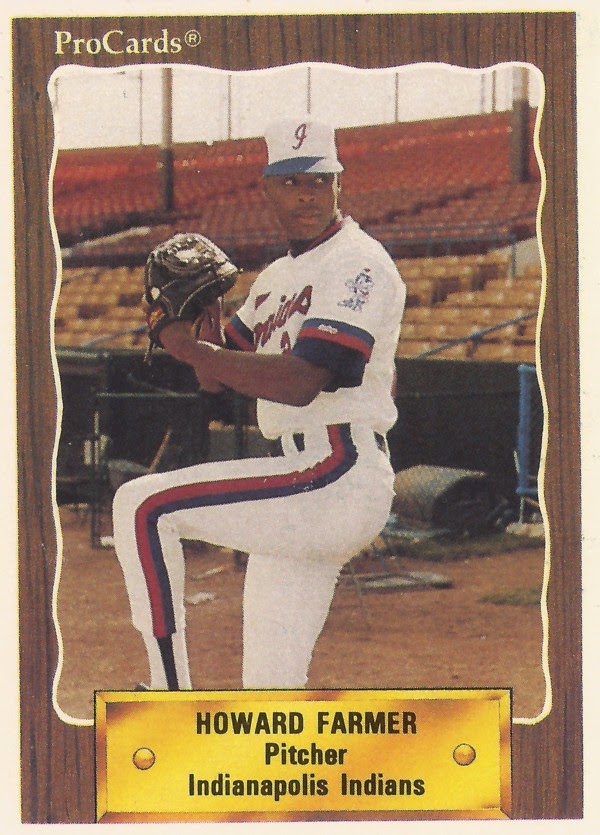 Howard Farmer started off 1990 as one of the Expos top prospects. That was not in doubt that April, one-time teammate Steve Fireovid wrote in his book, The 26th Man.

That spring, he'd pitched five shutout innings for the Expos against the Mets. But he was still sent down for more time at AAA.

"He has three attributes that, combined, make all the brass salivate," Fireovid wrote in his diary of the 1990 season at Indianapolis. "He has a live arm. He ordinarily has great command of three pitches. And he's young."

But Farmer's season and his career didn't turn out as Farmer and those who had branded him a prospect hoped. He went 7-9 that year with a 3.89 ERA. He also got two call-ups to Montreal, going 0-3 with an ERA over 7. He wouldn't make it back.

Farmer grew to that prospect status after being taken in the seventh round of the 1987 draft by the Expos. He played that year at short-season Jamestown, going 9-6 with a 3.27 ERA.

In a May 1989 game, Farmer gave up four runs in five innings, The Orlando Sentinel wrote. He went 7.2 innings in a June game with Jacksonville, giving up just three hits and one run, according to The Rock Hill Herald.

In spring 1990, Farmer did well. He had that five-inning outing teammate Fireovid noted. He also had a three-inning hitless March 27 outing. Sent to Indianapolis, Farmer started off poorly. By early June, Fireovid was terming Farmer's year as dismal.

Still, Farmer got the call up by early July. He got into one game with Montreal, on July 2 against Atlanta. Farmer tied a club record. Just not the one he wanted to. In 4.1 innings of work, Farmer gave up six runs. The record came in the four home runs he gave up.

Called back up in September, the results weren't much different. Farmer lost two more games and ended with a 7.04 ERA.

Still, going into 1991, the Expos saw him as having a shot at the rotation. He pitched five shutout innings in a late March game.

"It was the best I've ever seen him throw," Expos pitching coach Larry Bearnarth told The South Florida Sun-Sentinel. It was also learned that Farmer pitched 1990 with a strained triceps.

Though he had a shot at making the big club, another injury ended that hope. Farmer pulled a rib muscle, automatically putting Farmer out of the running.
"We had to make a decision, but it turned out to be a no-decision," Expos manager Buck Rodgers told The Sun-Sentinel.

Farmer spent that year back at Indianapolis and the next year. He moved to the Brewers system in 1993 with similar results. One game at AA Chattanooga with the Reds in 1995 and Farmer's career was done.