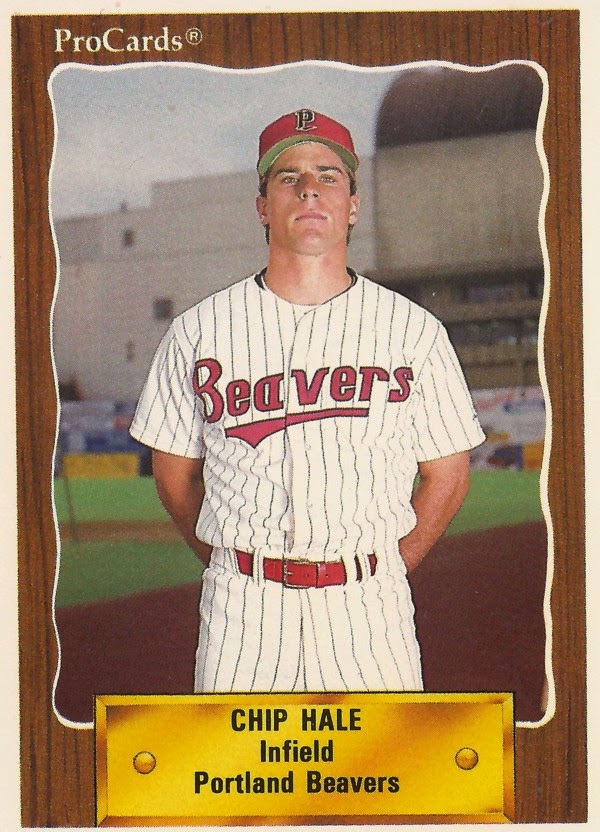 Chip Hale got into his first spring training game in March 1989, something he later admitted made him nervous, The Orlando Sentinel wrote.

He went 0 for 5, The Sentinel wrote, but he was just satisfied his team won and that his manager, Tom Kelly, put him in the lineup.

"I never anticipated playing in the first two games," Hale told The Sentinel. "I was delightfully surprised."

Hale went on that year to also play in his first major league game, for Kelly's Twins, then 27 more after that.

In all, Hale would play parts of six seasons for Kelly, enough, Hale, told The Seattle Times years later, to pattern his own post-playing career as a minor league manager and major league coach after the two-time World Series champion.

Hale's professional playing career began in 1987, taken by the Twins in the 17th round of the draft out of the University of Arizona.

The infielder played that first year at single-A Kenosha, hitting .345. He made AA Orlando in 1988. With Orlando, Hale hit .261. He also hit an RBI single late in a May game, The Sentinel wrote.

"Chip had a real tough at-bat, fighting off some tough pitches until he got a pitch he could do something with," Orlando manager Duane Gustavson told The Sentinel of Hale's game-winner. "He battled up there. That's the sign of a good hitter."

In spring 1991, Hale played himself into contention for the Twins' second baseman job, Kelly told The Associated Press that March. But Hale didn't make it. Instead, Hale became the guy who sent Rodney McCray through a wall.

On May 27, 1991, Hale hit a deep fly at home in Portland. McCray, playing for Vancouver, then crashed into, and through, the wall, in what's become a classic baseball play. "I saw the fence just explode," Hale told reporters later, "and he disappeared."

In one of those 1994 games, Hale got buzzed, then hit in a battle of beanballs. He also got his own hits in the game, going 3 for 3, according to The Hartford Courant.

"I'm all for what he did,'' Hale told The Courant about getting hit by Roger Clemens. "If it happened to one of our players, I would hope one of our pitchers would do that, too. As long as he doesn't hit me in the head, I figure I've got to take it."

Hale finished out his major league playing days in 1997 with 14 games with the Dodgers. One more year playing at AAA with the Cardinals and Hale moved on to his post playing career.

In 2008, Hale got an interview with the Mariners for the top job. It was the first of two interviews Hale has had for major league managerial posts. Hale is serving 2014 as bench coach for the Athletics.

As he was being considered for the Mariners' post, Hale described to his managerial style to The Times as mirroring his old major league manager, Kelly.

"My biggest thing is play the game the right way," Hale told The Times. "I played under Tom Kelly in Minnesota, and the one thing he preached from day one was 'respect the game.' We just did things the right way, whether it was working on bunt defenses, taking infield, outfield. If we didn't do it the right way, we'd keep on doing it again."

Hale saw his third base coaching duties as assisting runners thinking on their own, Hale told The Newark Star-Ledger in May 2010.

"Sometimes, I feel like fans think it’s like PlayStation, and I have a remote control on the runners," Hale told The Star-Ledger. "Basically what I do is, I validate what they’re thinking. The ball is hit, they know where the guy is playing, they know the speed of the ball, they know the ballpark, they know everybody’s arm. Now if I have to hold them, they listen to me. But I’m a validater."

Chip Hale's hit that sent Rodney McCray through the Portland fence in 1991: