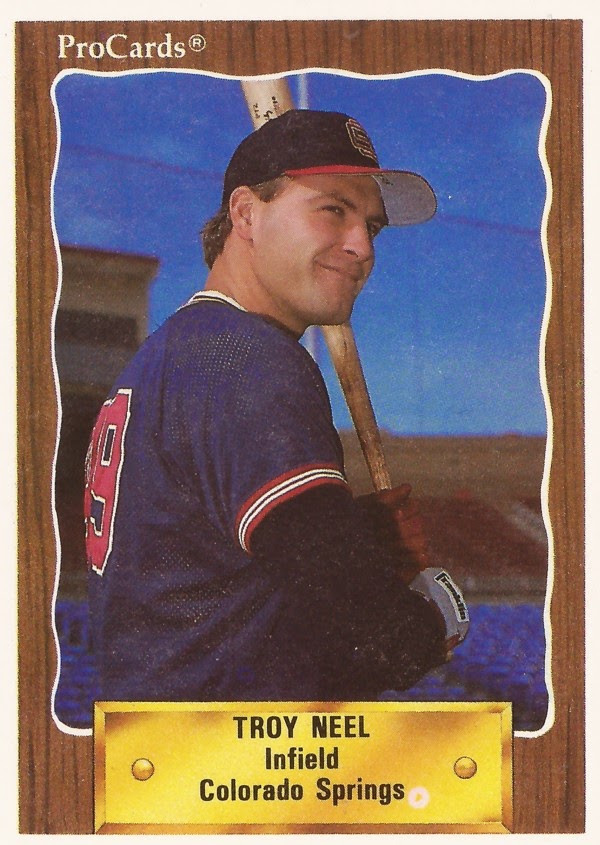 The Athletics were playing out the string in September 1993, but they were still doing some damage and playing spoiler. On Sept. 9, Oakland and Troy Neel contributed to a Blue Jays six-game losing streak, beating Toronto by a score of 7-4.

"Nobody likes to be called a spoiler," Neel told The Associated Press after the game. "It means you're out of it. We're not trying to be spoilers. We're trying to salvage something out of a pretty dismal season."

Neel himself was called a lot of things in his professional career that spanned more than a decade, and afterward. He was a prospect and a journeyman. He was also called a long-time star in Japan.

But Neel is perhaps best known today by another name: "Deadbeat Dad." Neel amassed more than $700,000 in child support debts owed for his two children in his home state of Texas, all while owning his own private island in the South Pacific.

Neel's career began in 1986, signing with the Indians out of Texas A&M University. He made AA Canton in 1989 and AAA Colorado Springs in 1990. In January 1991, Neel arrived in the Oakland, traded for Larry Arndt.

With the Athletics, Neel was back in AA for 1991 at Huntsville. He returned to AAA the next season, and made Oakland. Neel debuted with the big club in May 1992, playing in 24 games for Oakland that season, hitting .264.

Helping get Neel some recognition were back-to-back games in July, where he hit two home runs in each game. He got four hits and seven RBIs in one game and three hits in the other.

"The ball hasn't gotten any bigger, but it seems like it has," Neel told The Associated Press after the second two-homer game . "You hope it lasts, but there's always something to humble you in this game. You can't go out there and hit a home run every time."

Neel stayed with the Athletics through the shortened 1994 season, hitting .266 and another 15 home runs. Early that year, Neel's Athletics went on a 12-game losing streak, broken May 1 with an 8-1 win over the Yankees. Neel went 2-5 with four RBIs in the game.

"When I came in (to the clubhouse) I asked where the champagne was," Neel told The AP after the game. "I was waiting for somebody to pop one. We're just glad it clicked today."

Neel didn't return to the majors after that year. Instead, he went to Japan, playing there with the Orix BlueWave for six seasons. Neel hit .264 with 136 home runs over his time with Orix. In 1996, his team won the Pacific League title and the Japan Series, Neel hitting 32 home runs to lead the league that year, according to The Japan Times.

Neel attempted to extend his career in Korea in 2001, but poor hitting and a barroom brawl ended that, The Japan Times wrote. Soon after, he made the Texas list of Most Wanted Deadbeat Dads. By February 2002, he owed $220,000. That number eventually topped $700,000.

It started growing in 1998, when he was ordered to pay $5,000 in child support. But Neel didn't pay. Instead, he moved to the South Pacific island of Vanuatu, purchasing his own 16-acre island, The AP wrote.

Law enforcement finally caught up with him in December 2008, the U.S. Marshals arresting him at Los Angeles International Airport.

The next May, Neel pleaded guilty and faced two years in state prison. He also later reached a settlement with his ex-wife, agreeing to pay a fraction of what he owed, $116,000.

"After retiring from professional sports, Neel had the financial resources to purchase an island resort in the South Pacific – but he failed to support his children," Texas Attorney General Greg Abbott said in a statement after Neel's May 2009 plea. "Today’s guilty plea marks an important chapter in the state’s lengthy effort to hold Troy Neel accountable for violating the law.”