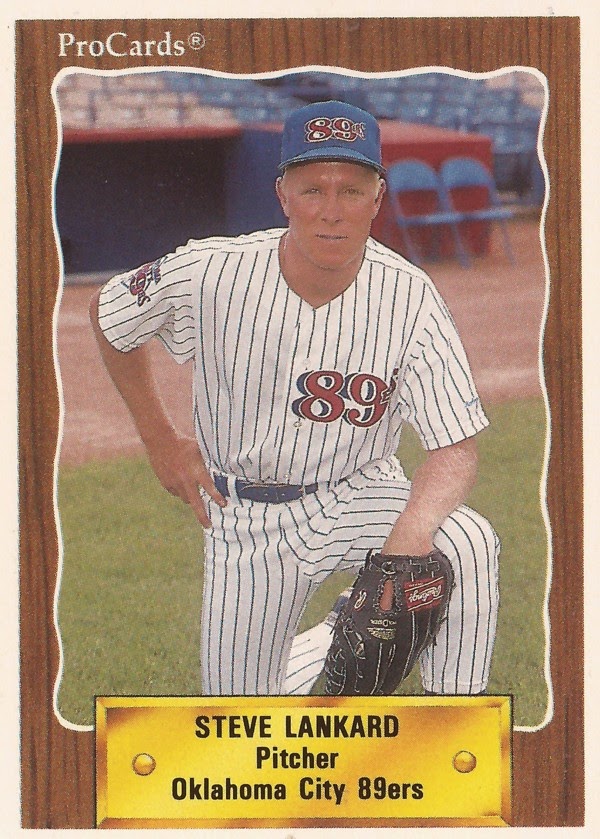 Steve Lankard's knee was "just like corn bread, just pieces, just pieces all over the place," he told The Los Angeles Times.

With days left to go in the 1988 season, the pitcher had taken a ball hard off his kneecap. Surgery put the knee back together, but the comeback was a difficult one.

"I know Lank and his personality," Lankard's pitching coach the next year at AA Tulsa Jeff Andrews told The Times. "I knew that if anybody could come back, he would be the one. For him to be throwing when I talked to him in January was nothing short of a miracle."

Though Lankard came back for 1989, getting into 35 games at Tulsa and 10 more at AAA Oklahoma City, his comeback didn't last. He returned to Oklahoma City for 1990, but got into just 12 games, ending his career.

Lankard's professional career began in 1985, selected by the Rangers in the 20th round of the draft out of Long Beach State.

He played that first professional season between the Rangers' rookie Gulf Coast League team and single-A Burlington. Between them, he posted an ERA of 1.19.

Lankard also made the Florida State League all-star team, picking up 17 saves on the year.

By mid-July,though, Lankard was in Oklahoma City, playing at AAA, telling The Times where was no way he was going to quit. He also had advice for others looking to play in the game.

"I would say, 'You've been told ever since you started playing the game, to have fun. If it's not fun, then get out of the game,' " Lankard told The Times. "Work your butt off and strive for your goals."

Lankard's final year was his next, with 12 outings at Oklahoma City. He posted an ERA of 5.13 and he was done.