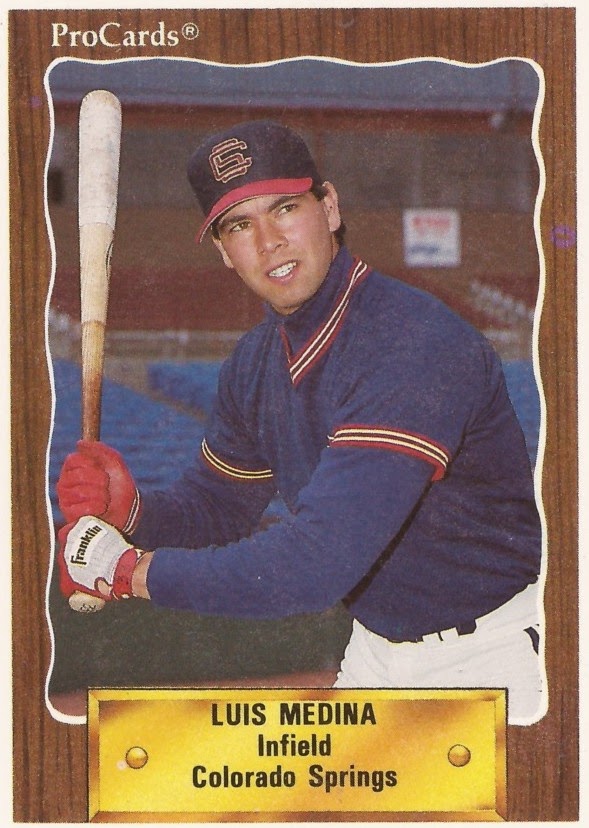 Luis Medina led off top of the seventh, the score still tied at zero. Against the Angels' Chuck Finley, and in Medina's native Southern California, Medina hit one out, giving his Indians a 1-0 lead in a game they would win by the same score.

"It was my first game here in front of the home crowd," Medina told The Los Angeles Times afterward. "It was really a lot of fun."

Medina hit that home run in front of the home crowd, his 10th homer in his 43rd major league appearance. It would also be his final home run in the majors. Medina played in just three more games for the Indians that year and five more two seasons later, marking the extent of his big league career.

Medina's career began in 1985, taken by the Indians in the ninth round of the draft, out of Arizona State. At Arizona State, the right-handed hitter experimented with switch-hitting his last year after a forearm injury.

The renewed right-hander played his first year as a pro at short-season Batavia, hitting .266 with 12 home runs. He moved to single-A Waterloo for 1986, hitting .317, with 35 home runs.

He continued hitting over .300 at AA Williamsport in 1987 and at AAA Colorado Springs in 1988. In 19888, Medina also earned his first look at the majors, as a September call-up.

With that call up, Indians manager Doc Edwards got a chance to see in action the player The Associated Press called "the most prized prospect" in the Indians system.

"When I saw him in spring training, I knew he had some talent," Edwards told The AP. "When he hits the ball, it jumps off his bat. But I won't know how much progress he has made until I see him against major league pitching."

In 16 games against major league pitching to finish out that season, Medina hit .255 with six home runs. He also struck out 18 times. One of those home runs came in another 1-0 game, one where his home run also broke up a no-hit bid.

Medina returned for another 30 games with the Indians in 1989, but his average dropped to .205. In 1990, he didn't see any time in Cleveland, playing just 94 games at Colorado Springs.

By 2006, he was back with the Royals, making Rule 5 draft recommendations. His recommendation that year: Joakim Soria. In the December 2011 Rule 5 draft, Medina recommended a Boston minor leaguer named Cesar Cabral, The Kansas City Star wrote.

"Louis thinks (Cabral) is better than a minor-league Rule 5 guy," Gene Watson, Royals coordinator for professional scouting, told The Star. "He's got arm strength. He attacks hitters. Louie thinks he’s got a chance to be a major-league prospect."