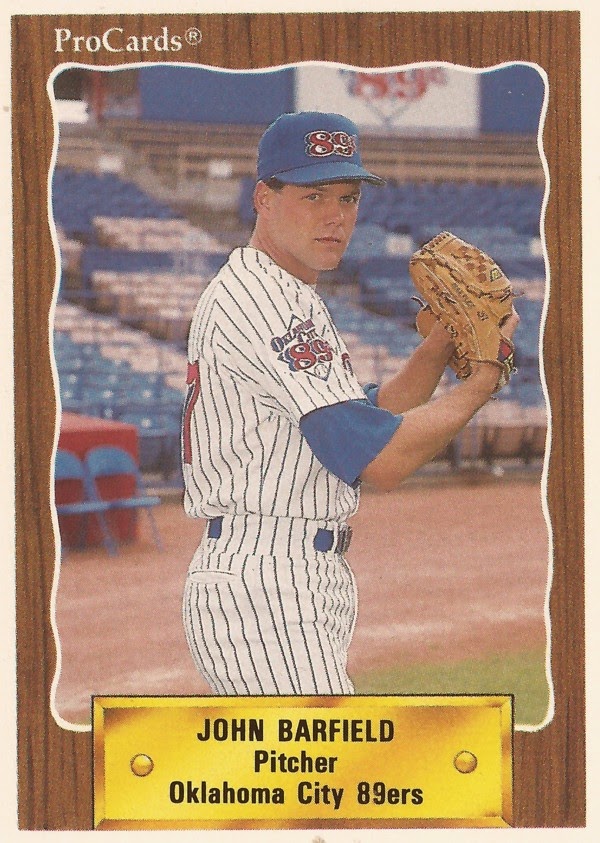 The Rangers needed a starter in June 1991 and John Barfield went out and gave them a start. It was one where the usual reliever Barfield went into the seventh inning, gave up just two earned runs and picked up the win.

"I only threw 88 pitches. I was getting stronger, hitting spots and the defense gave me the confidence to go right after the hitters," Barfield told The Associated Press. "I challenged them all of the way through."

Barfield went on to get seven more starts for the Rangers that year, his third year in the majors. Though he continued playing into 1997 in the minors and independent ball, 1991 was Barfield's last year with time in the majors.

Barfield made the majors with the team that drafted him, the Rangers. Texas took Barfield in the 11th round of the 1986 draft, out of Oklahoma City University.

Barfield began with the Rangers as a starter. At single-A Salem and single-A Daytona Beach. Between them, he went 3-6 in 14 starts. Barfield played at single-A Charlotte in 1987, then moved to AA Tulsa in 1988. At Tulsa, Barfield went 9-9 in 24 starts.

He made AAA Oklahoma City in 1989, going 10-8 in 28 starts. He also made Texas in September. He got four outings with the big club, two of them starts. In his first start, Barfield went four scoreless innings, then after giving up three earned runs in the fifth, got pulled and picked up the loss.

In 11.2 innings of work for the Rangers that September, Barfield gave up eight earned runs and picked up that loss.

His first win would have to wait until 1990, Barfield switched to full-time relief. On June 29, 2.1 scoreless innings earned Barfield that first win. He ended the year with four in 33 total relief appearances. He also picked up a save in July.

Barfield then came back for 1991, what would be his final year in the majors. He got into 28 games, with those nine starts. He went 4-4, with a 4.54 ERA. In May, Barfield went two innings to pick up his second career save. The Rangers win was also the team's 11th in a row.

"I knew in spring training we'd surprise a lot of people," Barfield told The AP after his save. "Now we're even surprising ourselves."

Barfield returned to the minors in 1992, getting three outings back at high-A Charlotte and playing the rest of the year at AAA Oklahoma City.

He played in affiliated ball into 1995, going through the White Sox, Dodgers and the Rangers systems. He then played a game for the Indians at AAA Buffalo in 1997, after a year in Mexico. His last recorded playing time came in 1998, in the independent Atlantic League.