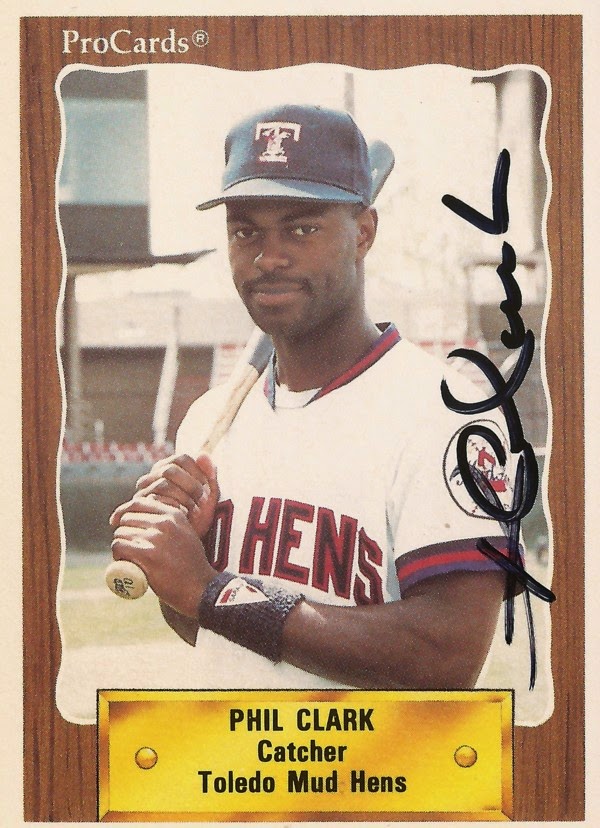 Phil Clark jumped from high school directly to the pros in 1986. He also jumped to a new position, catcher.

That's the position the Tigers slotted him in after taking him 18th overall. Clark wasn't so sure it was the right choice.

"I wasn't ready for that," Clark told The Greatest 21 Days recently. "I had no idea how to do it. I had a good arm. Looking back on it, I kind of wish they would have let me be an outfielder. I think I would have gone farther with that."

Clark ended up going far enough, just not as a catcher. He debuted in the major leagues in 1992 and ended up getting time in five big league seasons, then four in Japan.

Clark spoke with The Greatest 21 Days recently in Troy, NY, where Clark's Mahoning Valley Scrappers were taking on the Tri-City Valley Cats. Clark is serving in 2014 as hitting coach for the team.

Clark covered his career in baseball, from growing up in a baseball family in Texas, to turning pro and working to make the majors. Once in the majors, Clark worked to stay and become a regular. In one season he was, Clark getting into more than 100 games.

Clark also talked about his time in Japan. In Japan, Clark recalled breaking free from American conventions on hitting. He also broke out for a total of 93 home runs hit over his four seasons there.

Clark started with the Tigers at rookie Bristol. He moved to single-A Fayetteville for 1987. He made AA London for 1989.

All along, he hit well. He hit .290 at London. But his defense lagged. Clark recalled the instruction not being like it is now. His true instruction didn't really come until later when he made the 40-man roster and was around older players.

"We were kind of left out there to fend for ourselves back then," Clark said.

Clark's early years were spent making it to a new level each year. He made AAA Toledo in 1990. That year, though, Clark recalled getting injured, his first major injury.

He bounced back, but he also returned to Toledo for a second year in 1991. He had also all but left catching behind and transitioned to the outfield.

Clark also recalled getting those doubts then that he'd make it to the majors. But, in May 1992, he got his call.

His excitement, he recalled, had to be short-lived.
"If you know Sparky Anderson, you know when you walk in the clubhouse you want to get your enjoyment out of the way with early," Clark said. "Sparky, I would describe him as a pretty strict manager. The younger guys had to earn their wings with him."

For 1993, he moved to the Padres, taken off waivers. It was the team his brother Jerald Clark had played for, except Jerald was taken in the previous November's expansion draft.

But with the Padres, Clark had an opportunity to be a regular. That was something he recalled wasn't there with the Tigers.

"Now you're going somewhere where you're going to get an opportunity to prove yourself," Clark said, "so I was really excited about that move."

Clark took that opportunity to time in 102 games that year. He hit .313, with nine home runs and 33 RBI.
He also noted that he got to play with guys like Tony Gwynn, Gary Sheffield and Fred McGriff. "Going into that atmosphere and learning from those guys was pretty good," Clark said.

For 1996, Clark signed with the Red Sox. But he only got into three games in Boston. He spent the rest of the year at AAA Pawtucket.

"They treated me well there," Clark recalled of his time in the Boston organization. "I think they played a big part in me getting over to Japan and spending those four years over in Japan."

Clark recalled getting the offer to go to Japan and accepting it without much hesitation.

"It's being smart, It's seeing what's in front of you," Clark said. "I felt like I could go over to Japan, do well, spend a couple years over there, show that I can be an everyday player at the major league level and show that I can get a job here."

"That was my mindset," Clark added. "I just needed to go somewhere and play everyday and show that I can be productive."

He ended up staying for four years. Japan also ended up, in his mind, his major leagues.