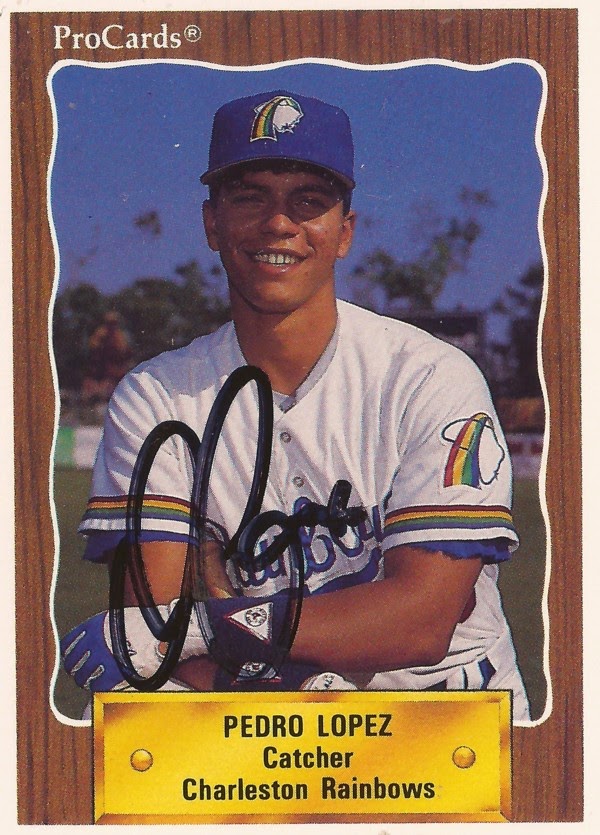 When Pedro Lopez couldn't get a ride back to the team apartments with a teammate, he called a cab.

It was 1990 and Lopez was playing for the single-A Charleston Rainbows, at least he was on the team. He wasn't getting much playing time.

On this night, the ride back was to be by taxi. Lopez recalled kind of preferring it that way.

"I was just by myself all the time," Lopez recalled recently to The Greatest 21 Days. "I was a loner."

"One day I remember I was the last one out of the clubhouse," Lopez recalled. "He happened to drive by the ballpark and saw me waiting for a taxi."

The booster offered Lopez a ride.
It was a ride that Lopez recalled changed his outlook. It also helped him stay in the game another decade as a player. And he's still in the game in 2014 as manager for the AA Binghamton Mets.

Lopez spoke to The Greatest 21 Days recently in his NYSEG Stadium office in Binghamton, telling the story of that night at Charleston and others spanning his more-than quarter century in the game.

Lopez covered his time growing up and learning the game in Puerto Rico, to his long professional playing career. He also told of his now long career as a manager in the minors.

But, helping make that long career happen, was that ride in Charleston, S.C. The booster, Lopez recalled, drove him to the team apartments and they talked. They continued talking once they arrived, moving on the hood of the car.

The conversation went from Lopez being loner to religion, to church.

Out of that conversation, Lopez recalled praying.

"I told the Lord, I pray to the Lord, 'If I don't make the big leagues, so be it. I just want to go back to being the same Pedro Lopez I was before, because I know for a fact that I'm not," Lopez said. "And I tell you what, He heard me. He really did.

"I had really good years. I had chances and it never happened," Lopez said of making the big leagues. "But you know what, I went back to being the same person again."
Out of that, Lopez also started going to church again. It was something he recalled telling his mother about. "It really changed my life."

After starting the year largely on the bench, Lopez soon found himself in the lineup again. He recalled doing well until he broke his finger on a sacrifice bunt.

The ball threatened to hit him in the face. As he got out of the way, it hit his finger. He ended up hitting just .198 in 32 games that year. His next season was delayed by another injury. Assigned back to single-A Waterloo, though, Lopez took off.

"I had a terrific year," Lopez recalled of that season at Waterloo, his second overall in the city. "Then all of a sudden I'm back on the map again."

He found himself at AA Wichita in 1992, then got his first look at AAA in 1994 at Las Vegas. Once he got to Wichita, Lopez remembered thinking he had a chance at the majors.

Along the way, Lopez got married. He got married in 1993 to his longtime girlfriend Gladys. They celebrated their 20th wedding anniversary in 2013, the same year Lopez celebrated his first time in the majors, three weeks spent there in September as a coach.

"This is the only thing I know how to do," Lopez recalled thinking. "I'm a little too old now to go back to school and make a career at something I always wanted to do and I just kept on going."

Lopez eventually played in 13 professional seasons. In five of those seasons, he saw time at AAA. He never played in the majors. He played seven seasons in the Padres system, two in the Brewers system and four seasons in the minors with the Astros.

"I feel like, even though it's everybody's dream, everybody that's involved in baseball, to be at the major league level, I always say the Lord's got better plans for us and He's got a better purpose.

"My purpose was not necessarily to be in the big leagues and making a lot of money. My purpose was to sit behind this desk and help young men like the ones I got in that clubhouse and to try to make them better players and better persons, too."

But, before Lopez could start his minor league managerial career, he nearly did make the bigs. (Go to Part 3)