Interview Part 2: Bruce Walton, Was His 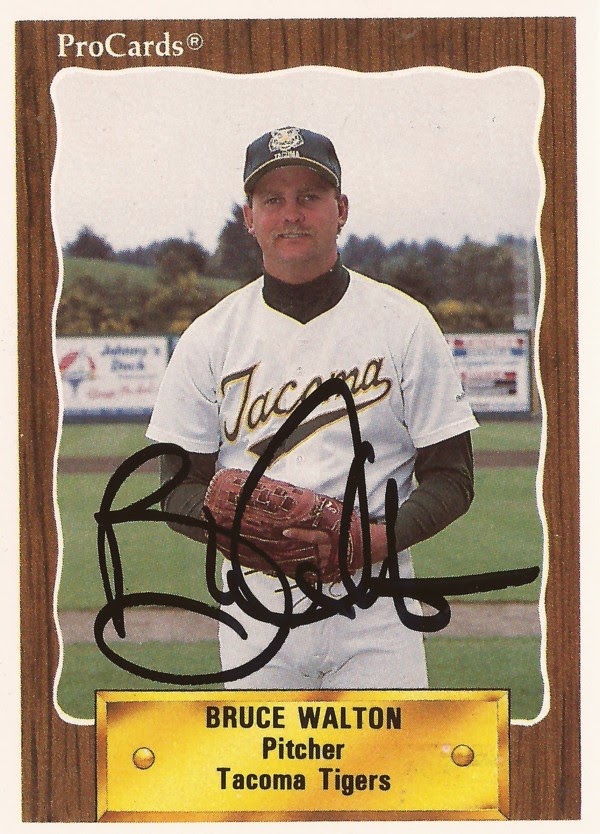 Bruce Walton made the majors in 1991. His next task was trying to stay.

For Walton, though, that never did happen. Over four major league seasons with multiple call ups and tickets back to AAA, the relief pitcher totaled just 27 major league outings.

"At times it was frustrating," Walton recalled recently to The Greatest 21 Days. "A lot of it was out of my control."

But that's what his career ended up being: He was the pitcher moved up and down when needed. He recalled coming to peace with that.

"It wasn't the best major league career," Walton said, "but it was mine and I did it and I really relished what I did. I was really proud of what I did."

Walton then turned that career into one as a coach. He's spent a decade in the majors as a bullpen and pitching coach for the Blue Jays. For 2014, he's serving as pitching coach of the AAA Iowa Cubs.

It was in Iowa, at his Principal Park office in Des Moines, that Walton spoke with The Greatest 21 Days.

Walton covered his life in baseball, from his youth in Bakersfield, Ca., to college in Hawaii and to the pros.

Once in the pros, he had to show he could pitch at the highest level while throwing a fastball that didn't blow people away. He got there through control. Those are lessons he now teaches as a coach.

Walton made the Athletics in Oakland in his seventh season as a pro, his third season to start at AAA Tacoma.

He worked his way through the minors unable to throw as hard as some of his teammates. What he offered was location.

"There were times in my minor league career where I tried to throw harder," Walton said. "There were times where I could throw the ball a couple miles an hour harder, but I had no idea where it was going to go and it actually worked against me."
He'd throw between 88 and 90 mph and then try to throw 92 or 93. At the higher speed, he'd be horrible, he recalled.

Walton credited a couple coaches with guiding him in the right direction. What they told him was just throw at the velocity he could throw strikes with and his shot would come.

That shot finally came in May 1991. He was a closer at AAA Tacoma. He recalled his manager calling him in and telling him he'd be changing roles. He'd be a starter. Well, maybe he'd do long relief.

Walton questioned why he'd be going to long relief. He had the most saves in the league at the time.

"He says, 'well, that's what you're going to do in the major leagues and that's where you're going tomorrow,'" Walton recalled. "It caught me by surprise because I didn't ever know if it was going to happen."

Walton debuted at Yankee Stadium. He pitched an inning of relief, walking one and not allowing a hit. He ultimately got into 12 games for the Athletics that year, spreading those outings over May, June, August and September.


The team itself was coming off three-straight American League championships and would win another division championship the next year.
"What a club," Walton said. "I mean I walked into a dynasty. So I not only got to experience all the stuff at the major league level, I got to experience winning with a great ballclub and that was pretty cool."

Over his next three seasons, though, Walton never got into more than seven major league games in a season. In 1993 and 1994 he got into just four each, four with the Expos in 1993 and four with the Rockies in 1994.

Once, he recalled his role was simply to eat innings, no matter how bad it got. In August 1992, Walton recalled, the bullpen was shot and the Athletics had the lead in the division. He ended up giving up eight earned runs in the 13-4 Oakland loss, but he got the bullpen some rest.

"Although it wasn't real good on my end, I saved the bullpen so that they were ready," Walton said.

Later that same month, Walton recalled getting Jack Clark of the Red Sox out on a 3-2 pitch to end the bottom of the eighth. Clark represented the potential tying run.

Walton remembered during his last couple years in pro ball looking down the road, maybe to a career in coaching.

"I always had in the back of my mind that I wanted to coach because I always helped the kids around me, my teammates, my fellow pitchers," Walton said. "I was always there or them. I always tried to help them get better, figure stuff out. I always had that in me. I always had the coach in me, even though I was playing."

After making the Rockies in 1994, Walton played a season in independent ball and then moved on to his new career as a coach. Struggling to get back to the majors wasn't what he wanted. He wanted to coach.

Walton called the move to coaching a lot of fun.

"The cool thing about it is," Walton said, "I got to the major leagues as a coach a heck of a lot faster than I did as a player."

And his first stint there lasted a decade.