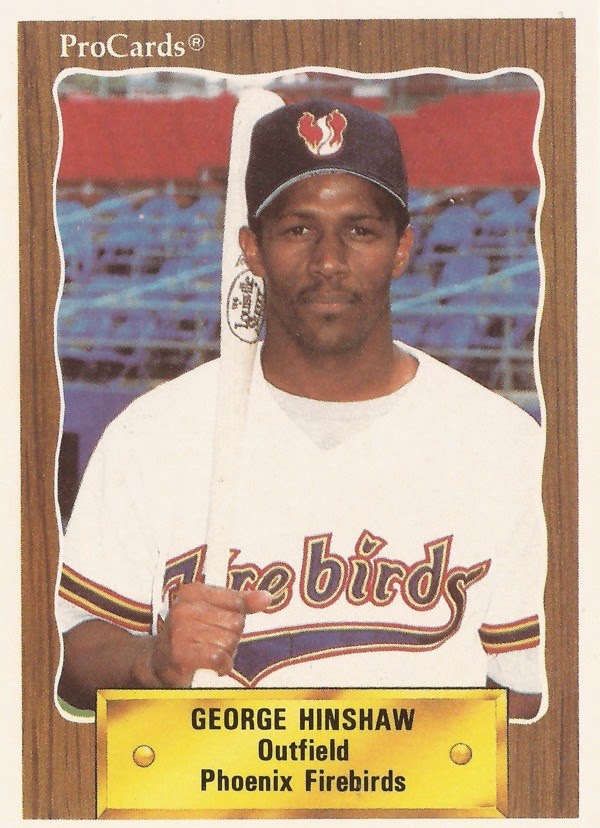 Playing at AAA Las Vegas in 1985, George Hinshaw told The Los Angeles Times in 1985 he was not so fond of the Nevada city, mainly its reputation.

"Vegas wasn't built on winners, y' know," Hinshaw told The Times. "I learned my lessons on gambling when I played at Reno. Made $280 every two weeks. It would be foolish to risk losing that."

Maybe it was that. Or maybe it was that Hinshaw was in his third full season playing for the AAA Stars, having gotten all of 13 games in San Diego. And, in a career that spanned a decade and got him to Japan, those 13 games would be Hinshaw's only games in the majors.

Hinshaw's career began in 1980, taken by the Padres in the 11th round, out of the University of La Verne. He played that first year at short-season Walla Walla, hitting .287, with three home runs.

It was also in 1982 that Hinshaw debuted in the majors, with six games and 15 at bats with San Diego. He got four hits with one RBI.

Hinshaw returned to the minors for 1983, his first season at AAA Las Vegas. He hit .283, with 16 home runs. He also earned his second trip to the majors.

Hinshaw got 7 hits in 16 at bats. Four of those hits came in the same game, Oct. 1. His fourth hit of that game against the Braves proved the game-winner, in the 10th inning. His final major league came came the next day.

After playing the next two seasons at Las Vegas, Hinshaw moved to the Indians and the Reds systems in 1986. He moved to the Reds in June. Between the two, Hinshaw hit .278.

Then came Hinshaw's move to Japan. He played there for 1989. In Japan, Hinshaw was known by his first name, George. His last name, The Japan Times wrote, could be read as "bad business." Hinshaw hit .294, with eight home runs with the Chunichi Dragons.

Hinshaw returned for one more season in the minors, in 1990, with the Giants at AAA Phoenix.

After three seasons off, Hinshaw returned as a player in 1994, playing in Taiwan. He played there through 1997, finally ending his professional career.

Hinshaw has since become a coach in high school and college. He's also done work with the MLB Urban Youth Academy, at one point taking a team of youth to Japan.

More recently, Hinshaw has served as head coach of the Los Angeles City College baseball team. There, Hinshaw has worked to rebuild the program. In February 2009, his second season as coach, Hinshaw described to The Los Angeles Wave how he was going to do that.

"What we have here is a bunch of castoffs, guys who have been shuffled around," Hinshaw told The Wave. "The first thing we have to do is get them believing in themselves."