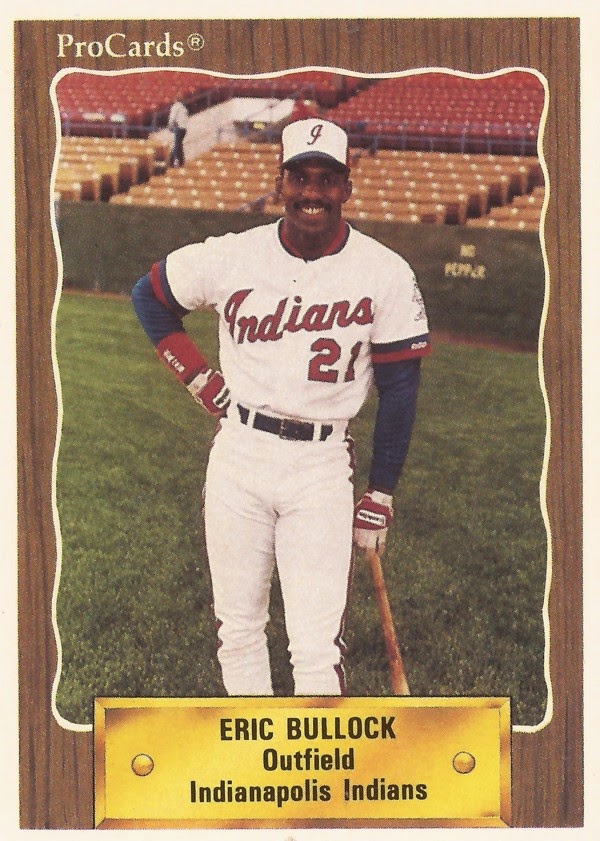 Coming through high school, Eric Bullock concentrated more on his football than his baseball, The Los Angeles Times wrote.

But a series of football-related injuries changed that dynamic and Bullock ended up turning pro as an outfielder, instead of a quarterback.

"I think things have turned out pretty well for me," Bullock told The Times in 1991 as he played for the Expos. "At first I really didn't enjoy playing baseball that much. I played because I didn't like running track and I wanted something to do to pass the time."

Bullock turned pro in 1981, taken by the Astros in the first round of the June secondary draft out of Cal State Fullerton and Harbor College.

Bullock spent that first year in rookie ball, hitting .293 in the Gulf Coast League, stealing 24 bases. He spent 1982 largely at single-A Daytona Beach, getting his first look at AA Columbus, swiping 50 bases between them. He got his first look at AAA Tucson in 1984, then returned there in 1985.

He hit .319 at Tucson in 1985, stealing 48 bases and earning his first trip to Houston in late August. With Houston, Bullock got into 18 games, getting seven hits in 25 at bats. His first hit came in his second at bat, a two-run double on Sept. 2.

"I just wanted to make contact," Bullock told The Chicago Tribune after the game. "He just hung a slider and I happened to get good wood on the ball. With a man on third and one out, I just wanted to put the ball in play. I did my job. I'm just glad I got a chance to help the team."

Bullock got back to Houston for 1986, but only for six games. He got one hit in 21 at bats. After spending 1987 completely in the minors, and jumping to the Twins organization in a trade.

Going into 1988, Bullock started the spring with the reigning world champions hot, The Orlando Sentinel wrote. But Bullock didn't see himself having much of a chance to make the team.

Bullock did return to the majors with the Twins in 1988, but got into just 16 games in Minnesota. He then got six games with Philadelphia in 1989 and four games with Montreal in 1990.

It was in 1991 that Bullock had perhaps his best season. With Montreal, he got into 73 games. He also spent no time in the minors. He hit .222 with six stolen bases and one home run.

Bullock got eight more games with the Expos in 1992, then played 1993 with the Mets at AAA Norfolk. He came back for one more season in 1995 at AAA Las Vegas with the Padres, ending his career.