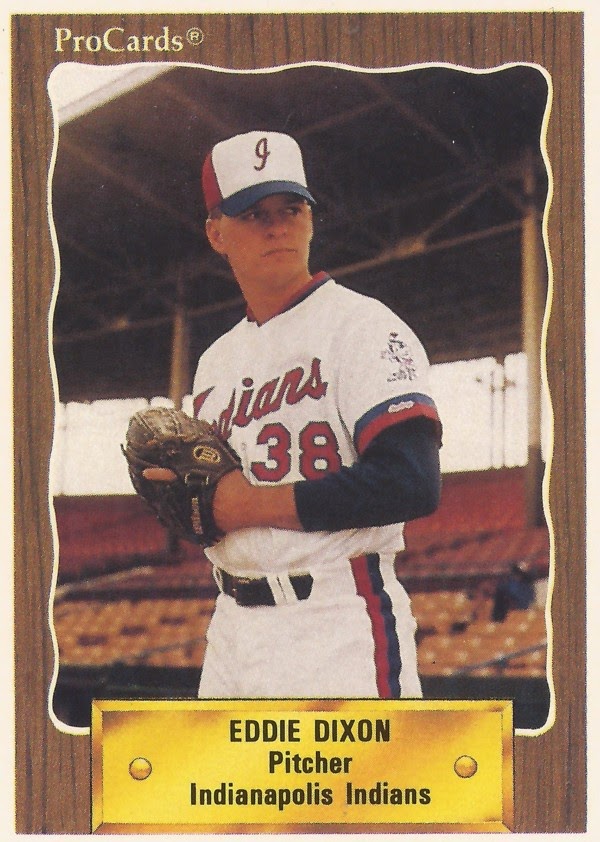 Eddie Dixon was about as nervous as he could be before this game in 1985. It was his first professional outing, for the West Palm Beach Expos.

Dixon promptly went out and threw a complete-game shutout. It was the first step in a career that Dixon hoped would go a few steps further, to the major leagues.

"All I really want is to get a chance to pitch in the major leagues," Dixon told The Palm Beach Post after the game, "and I plan to make the best of it."

Dixon would go on to a career that spanned 11 seasons, but that nervous feeling he felt in his first professional start, he would never get the opportunity to experience it in the majors. He got as high as AAA, but no further.

Dixon joined West Palm Beach in 1985, having been signed by the Expos as an undrafted free agent. He split the year between West Palm and short-season Jamestown, his ERA on the year at 3.21.

He returned to single-A West Palm Beach for 1986 and 1987, appearing in 43 games each year as a reliever. He was expected to be the stopper out of the gate in 1986, according to The Post. West Palm manager Moises Alou called Dixon a "pleasant surprise."

Dixon got his fourth save of 1986 July 1, throwing a single pitch to get the batter to pop out and end the game, The Post wrote. Dixon took the loss in another July game, giving up a late home run.

Dixon started 1989 with an ERA that by early June was below 1, at 0.83, and he was off to AAA Indianapolis. A 2.48 ERA in 27 appearances led to a return to Indianapolis for 1990. In one June 1990 game, Dixon pitched out of a bases-loaded seventh-inning jam by getting the batter to pop out.

Dixon joined the Pittsburgh system for 1992, pitching at AA Carolina and AAA Buffalo. He got the final out of a July game with Carolina with the tying run on second, part of a 3.21 ERA with the club. But his AAA time that year resulted in an ERA that wasn't like it previously had been. It ended at 5.57 in 26 outings.

On one windy May night, Dixon faced 10 batters and got nine of them out, The Arizona Daily Star wrote.

"He came in and pitched outstanding," Toros manager Rick Sweet told The Daily Star. "Dixon has really come along and given us some outstanding innings."

Dixon split 1994, his final year as a full-time player between the Reds' AA club and the Expos' AA team. The season and his career almost over, Dixon signed on with the Padres as a scout. He returned briefly in 2001, as a manager and player with the independent Albany Alligators of the All-American Association, appearing in four more games and he was done.