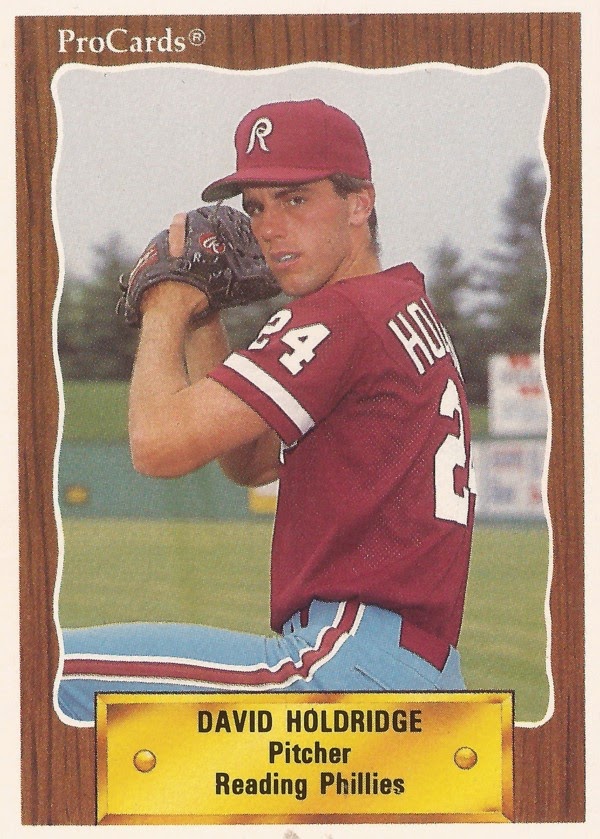 David Holdridge called it frustrating. But, he told The Philadelphia Daily News, thinking about it made it worse.

Pitching for the single-A Clearwater Phillies in 1989, Holdridge ended the season with a 7-10 record and a 5.71 ERA, The Daily News wrote.

"I need to get my mechanics down more solid," Holdridge told The Daily News. "Throw strikes, basically. If you want to get to the 'big show,' there's a lot of room for movement in this organization. I've seen a lot of guys move in one direction or the other. And I know which way I want to go."

Holdridge eventually did make it to the big show. It just took him a little while longer. He spoke that year in his second pro season. He didn't make it until his 11th and then just for seven brief outings.

Holdridge's career began in 1988, taken by the Angels in the first round, 31st overall, out of Ocean View High School in California.

The Angels took Holdridge, even after he couldn't pitch his senior season due to an injured shoulder, instead serving as a designated hitter. He returned to the mound for instructional league, then got into his first regular games in 1988, at Quad Cities.

At Quad Cities, Holdridge started off slow, but picked up toward August, according to The Los Angeles Times.

"I just had to learn how to pitch, instead of just throwing," Holdridge told The Times that August. "There wasn't any point where it all of a sudden turned around. It just took me a little time to adjust."

For 1997, Holdridge signed with the organization that would bring him to the majors, Seattle. He spent that year between AA Memphis and AAA Tacoma. He then started 1998 back at Tacoma.

In August 1998, though, Holdridge made the show. He then struck out the first batter he faced.

"For so many years in the minors, I had hoped for this moment," Holdridge told The Seattle Times after that game. "I finally got the first one under my belt."

Holdridge ended up getting seven appearances, 6.2 innings of work, giving up three runs and striking out six. He debuted Aug. 8 and pitched his final game Sept. 27.