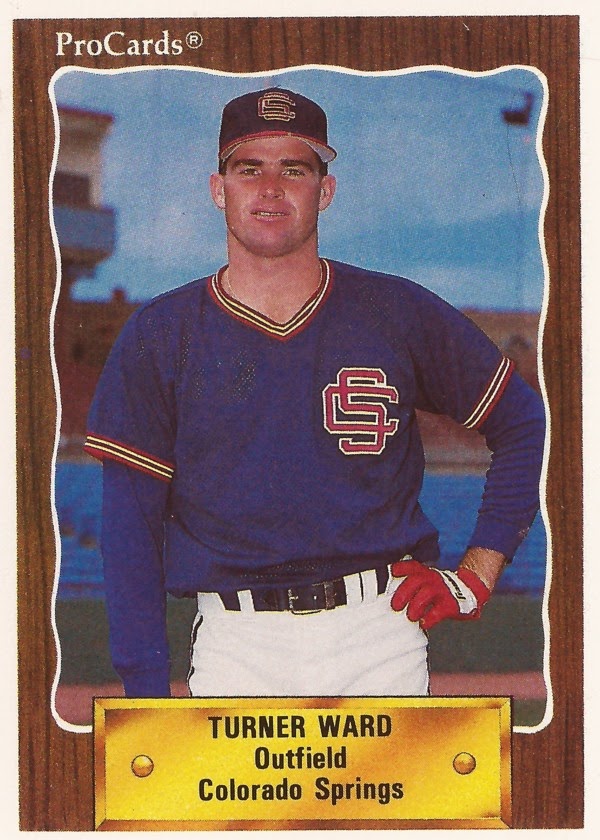 For Turner Ward, a new team in 1994 meant a new chance to show that he could regular major leaguer.

And he showed he could be a regular by going all-out that spring with the Brewers and leading the team in hitting, The Associated Press wrote.

"That was the only way I was taught to play, so I'm not really doing anything different," Ward told The AP late that spring. "I wanted them to see I play hard every day."

Ward went on to set a new career high for games played that year, 102, in a year that itself was shortened by the strike.

Ward would go on to get major league playing time each year through 2001. But he would only top 100 games once more, in 1998, getting into 123 for the Pirates that year.

Ward, though, has gone on to a post-playing career, teaching that hard-working playing style to younger players as a manager in the minors, serving 2012 at AA Mobile, and for 2014 as hitting coach of the Arizona Diamondbacks.

Ward's playing career began in 1986, taken by the Yankees in the 18th round, out of the University of South Alabama.

Ward played his first three seasons in the Yankees system, getting to AAA Columbus in 1988. For 1989, the Yankees sent Ward to the Indians in a three-player deal.

In his first year in the Indians organization, Ward only played 34 games, moving to AAA Colorado Springs for 1990.

That September, Ward then moved to Cleveland, playing 14 games with the Indians. In 46 at bats, Ward picked up 10 hits, including his first home run.

Ward played 48 games in the majors the next year, traded again mid-year to the Blue Jays. It was with the Blue Jays that Ward got his first regular playing time, 72 games in 1993. But he hit just .192 and was taken by the Brewers off waivers that winter.

Ward stayed with the Brewers through 1996, signing with the Pirates for 1997. It was in 1998 that Ward got his most playing time. He also got perhaps his most exposure, smashing through the outfield wall while making a catch in a May game at Three Rivers.

"I knew I was going to hit the wall, I just didn't know if I was going to get the ball or not," Ward told The Los Angeles Times afterward. "I felt something strange when I hit the [blue outfield] padding, and the next thing I knew, I was on the other side of the wall."

That catch came near the end of a Ward slump at the plate. Days before, he had been 0 for 17. He then sparked a Pirates rally with a triple. "I knew it was just a matter of time before I'd get a hit," Ward told The Beaver County Times.

Ward played three more seasons, the final two, though, getting into no more than 17 games each.

His playing career over, Ward went into managing and coaching in the minors. In 2006, he served as manger of the Gulf Coast League Pirates. In 2008, he moved to AA Mobile, serving as hitting coach.

Ward returned to the manager's office for 2011, at Mobile, winning Southern League Manager of the Year. He is returned to Mobile as manager for 2012, them moved up to Arizona for 2013 as a coach. He remains there for 2014.

Starting his tenure as BayBears manager in December 2010, Ward told The Mobile Press-Register he was expected to bring the same style he had on the field to the Mobile manager's office in 2012.

"One thing these (former coaches) taught (me) is to play hard," Ward told The Press-Register. "That's what you can expect from these guys as you come out to watch the BayBears this season. I always say, 'It doesn't take any talent to hustle. But it takes a desire and work ethic to get better.'"