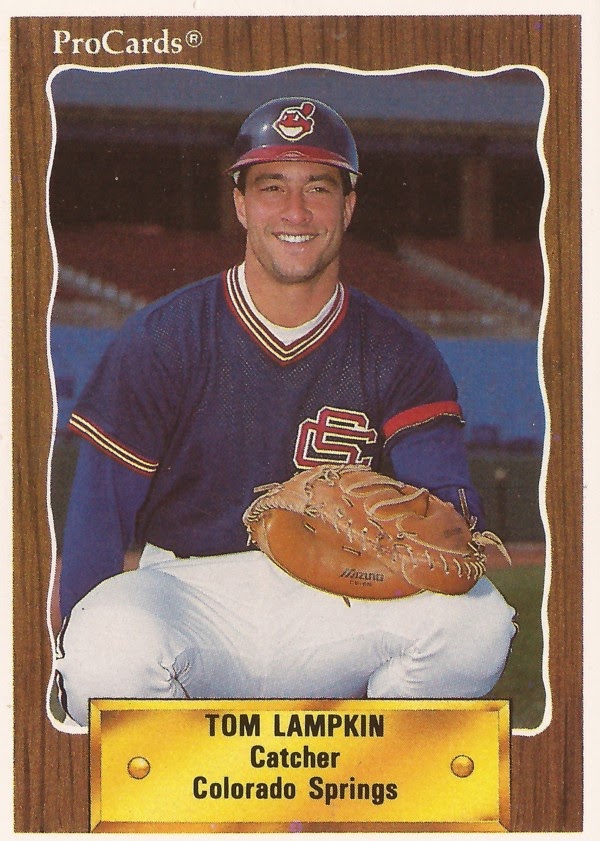 Tom Lampkin was fine with spending most of the 1992 season at AAA Las Vegas. He'd rather play there, than sit on the bench in the majors, he told The Los Angeles Times.

Just so long as the stay in AAA wasn't permanant.

"I'm happy with the way it all ended up," Lampkin told The Times after being recalled in September. "I love to play, I love to play every day, and I know it was something I wouldn't be able to do if I was up here.

"Ultimately," Lampkin added to The Times, "I'd love to play every day in the big leagues."

Lampkin's career began in 1986, taken by the Indians in the 11th round, out of the University of Portland.

He played that first year at short-season Batavia, then 1987 at single-A Waterloo. In 1988, he made AA Williamsport, then AAA Colorado Springs. That September, he debuted in the majors.

In that first appearance in the bigs, Lampkin got into four games, with five plate appearances. He went 0 for 4, with a walk.

Lampkin didn't get his first major league hit until two years later. He spent 1989 back at Colorado Springs, starting 1990 there again. In July, though, Lampkin arrived with the Padres in a trade. He played much of the second half in San Diego.

Lampkin got his first major league hit July 17, in a loss.

"I knew I'd get it sooner or later as long as I stayed up," Lampkin told The Times, "but it was something I'll always treasure. I just wish I could have gotten it under more pleasant circumstances, and we had won."

His major league time in 1992 was limited to nine games. Then, after being purchased by the Brewers, he spent those 73 games in the majors in 1993.

Lampkin spent 1994 back in the minors, with the Giants at AAA Phoenix. But, by 1995, Lampkin was back in the majors, in San Francisco. In June 1996, Lampkin won a game against the Marlins in the 15th inning, with a three-run home run. He also had two other RBIs in the 7-4 win.

"I've never driven in five runs before," Lampkin told The Associated Press. "I've never ended a game with a home run. This game ranks right up there."

Lampkin played with Seattle through 2001, before finishing out his career with the Padres in 2002, playing 104 final games.