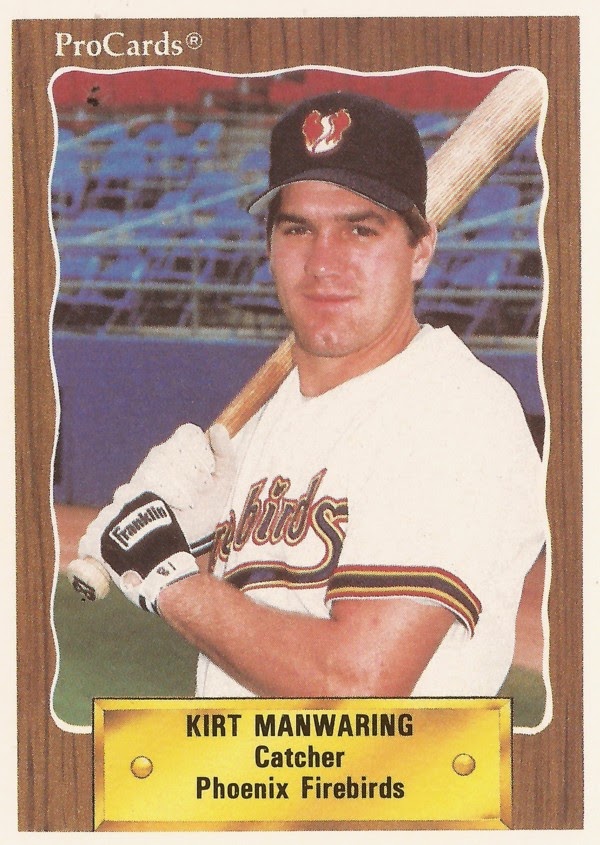 Kirt Manwaring came up with the bases loaded in the third inning of this August 1993 game, and hit into a double play. Three innings later, he hit a two-run home run, helping his Giants to a 10-7 win.

"Usually in the past, I got down on myself," Manwaring told The Associated Press of the sequence. "But you can't worry about your last failure in this game. I just forgot about it and tried to make the best of my next chance."

Manwaring got that next chance in is seventh major league seasons. It was a year where he got many chances, in 130 games. It was the most number of games Manwaring would play in a season, in a career that spanned 13.

Manwaring's career began in 1986, selected by the Giants in the second round of the draft out of Coastal Carolina University. He played that year at single-A Clinton, hitting .245. He moved to AA Shreveport for 1987, hitting .267 there.

His lack of success in 1989 helped lead the Giants to go out and sign Gary Carter for 1990. The Giants seemed to reference Manwaring's struggles at the plate the previous season.

"Kirt is still very young and has a future in the major leagues," Giants GM Al Rosen told Knight-Ridder Newspapers in January 1990. "Maybe we rushed him along a little too quickly last year."

Manwaring's major league time dropped to just eight games that year and just 13 at bats. He got two hits. Carter moving on for 1991, Manwaring's time increased to 67 games, then 109 in in 1992.

"Manwaring gives you catching and throwing, and he calls a good game," Giants manager Roger Craig told McClatchy News Service in March 1992. "I feel he'll swing the bat better. In the last two years, he's one of our most improved players."

The catcher was also losing a step or two. In May 1998, he was thrown out at first from right field by Pittsburgh's Jose Guillen. "It's kind of like when you're sleeping, your dreaming that someone is chasing you and you're not moving," Manwaring told reporters later.