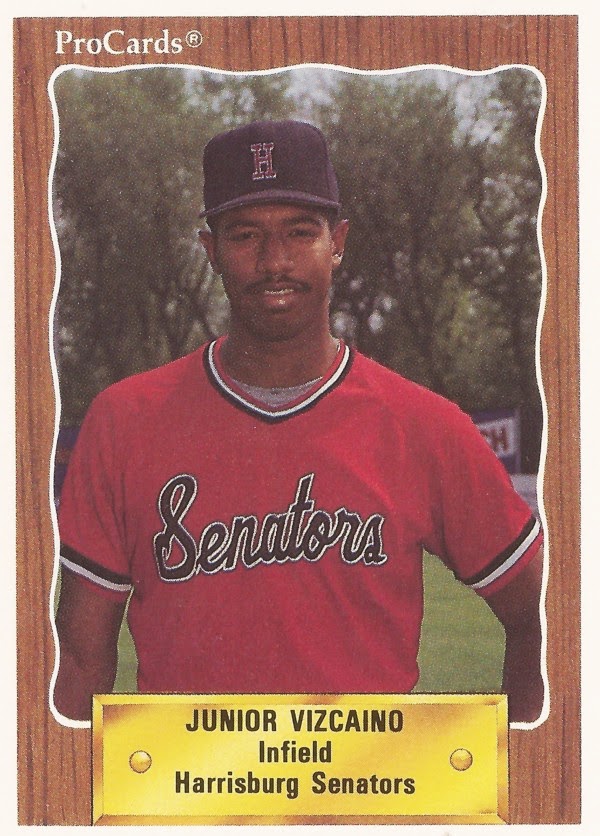 Coming off his second professional season, Junior Vizcaino had the eye of Pirates minor league field coordinator Buzzy Keller, according to The Pittsburgh Post-Gazette.

"He's just getting ready," Keller told The Post-Gazette that April. "He has all the tools. He's big, strong and he can hit. He's jumped high in a hurry."

Vizcaino never did fulfill those expectations. He only got four seasons as a pro. Now, though, it's Vizcaino who's been making the assessments. He's gone on to a long career as a scout.

Vizcaino's career began in 1987, taken by the Pirates in the 14th round of the draft, out of Valdosta State University in Georgia. He also attended Indian River Community College in Florida.

At Indian River, Vizcaino served time as a pitcher, picking up a win in a February 1985 game.

He returned to Salem for 1989, getting 17 games at AA Harrisburg. Between the two levels he hit just .238. In an April game at Harrisburg, Vizcaino hit a late two-run single that proved the game-winner.

Vizcaino then got a full season at Harrisburg in 1990. He hit .254. He picked up two hits in a June game. It was his final year as a pro.

In 2002, Vizcaino was a regional cross checker for the Royals. Before the draft, Baseball America asked him his thoughts on prospect B.J. Upton, whom he'd been impressed with since Upton was 12.