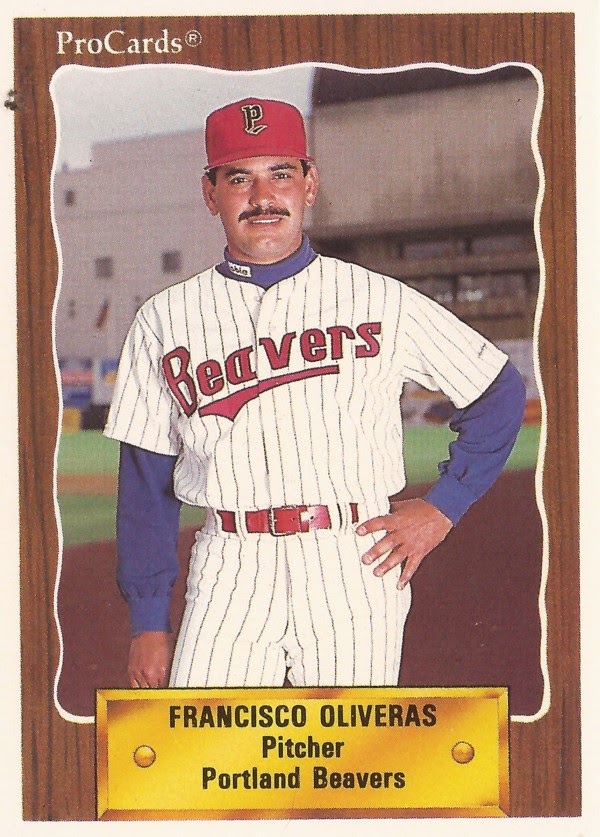 Twins rookie Francisco Oliveras had to marvel at the home run hit off him by the Royals' Bo Jackson. He had to, the ball went 404 feet, The Associated Press wrote.

"I realize now how much power he has," Oliveras told The AP. "I give him credit the way he hit that ball. It was down and out. We don't want to give him anything inside that he can pull."

Oliveras had to give himself credit, too. This was his first major league start, his third major league outing. Those first outings came in his ninth season as a pro.

Oliveras started his road to the majors in 1980, signed by the Orioles as a free agent out of his native Puerto Rico.

Oliveras first took a professional field in 1981, at single-A Miami, going 6-5 in 18 starts. He also got four outings up at AA Charlotte.

Oliveras signed with the Twins for 1988, getting his longest run at AAA with 21 starts at Portland. Oliveras started 1989 back at Portland, then got his call to Minnesota in May.

Oliveras got into 12 games for the Twins, starting eight. He went 3-4, with a 4.53 ERA. He stayed through the end of June, playing the rest of the year back at Portland.

After starting 1990 at AAA with the Twins, Minnesota sent Oliveras to the Giants at the end of May. With the Giants, Oliveras turned full-time reliever. He also made San Francisco for 33 outings, posting a 2.77 ERA.

Oliveras started an August game, going 5.1 innings against the Astros, giving up three runs on two home runs, picking up his first loss. The lineup was left-hander-heavy for the right-hander Oliveras.

"Six left-handers in the lineup made a difference," Oliveras told The McClatchy News Service. "I hung a slider for the first one, so that's my fault. But the second one was a changeup. It just got up and went."

Oliveras played one more season of affiliated ball, at AAA with the Rangers at Oklahoma City. He is last recorded as pitching in 1998, with 13 games at independent Nashua, ending his career.