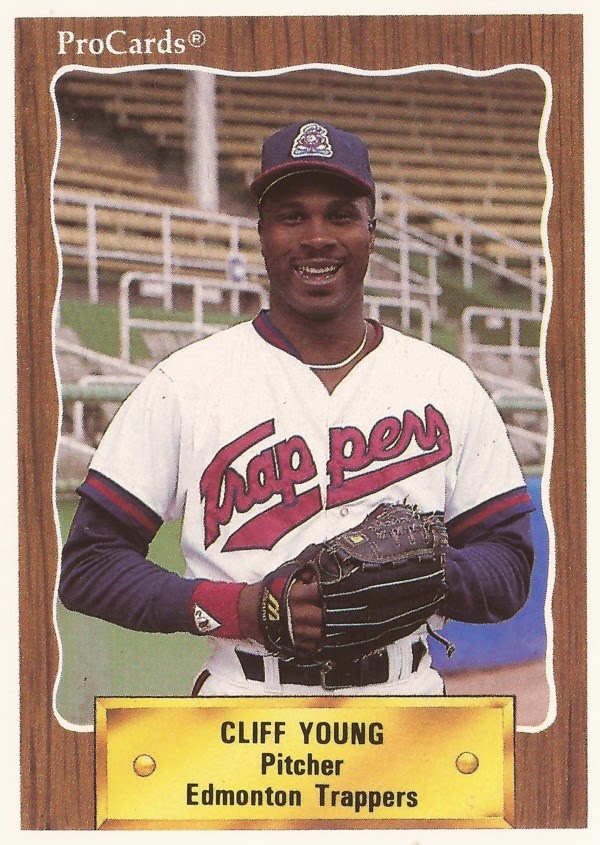 Fighting for a spot in the Angels bullpen in 1991, Cliff Young told The Los Angeles Times he knew there was a spot or two open and he came in mentally ready to take one.

"I see myself fitting in. I have a lot of self-confidence," Young told The Times. "The only thing I can do is be the best I can be and make a good impression."

Young did make the Angels that year, getting into 11 games in relief. Two years later, Young's best found him a home with another team, the Indians, getting 21 outings, seven starts.

That November, though, after his year with the Indians, it was Young's best that was remembered at his memorial service, a car accident in his home state of Texas having claimed his life at the age of 29.

Young's career began back in 1983, taken by the Expos in the fifth round of the draft out of Willis High School in Willis, Texas.

Young started at rookie Calgary, going 7-1 in 13 starts. He spent the next two seasons at single-A, going 15-5 the second year, at West Palm Beach.

Young spent the next three seasons in the Toronto system after a trade, making AA Knoxville his first year and AAA Syracuse his third.For 1989, Young arrived with the Angels, the team that would bring him to the majors, traded there for DeWayne Buice.

Young debuted with the Angels in July 1990. He ended up getting into 17 games for California that year, with a 3.52 ERA. He picked up his first loss, giving up a Rickey Henderson home run.

In August, Young showed progress, setting down the first batter he faced, after coming in with runners on.

"I learned you've got to bear down a little harder and make your pitches because you always want to get that first guy out with runners on base," Young told The Times after that outing. "I was getting behind and giving hitters their pitch. I was able to bear down tonight."

Young returned for 1991 for 11 more games, giving up six earned runs in 12.2 innings.  Young spent the next year back at AAA.

For 1993, Young signed with the Indians. He went 3-3 for the Indians in 21 outings, with an ERA of 4.62. He started a June game by going six innings, without giving up a run. He then gave up two in the seventh.

Then, the season over, Young went home to Texas. On Nov. 4, his truck slammed into a tree near his hometown, killing him. He left behind a wife and two young children, age 3 and 6, The Associated Press wrote.

At his memorial service, Young's high school baseball coach remembered a kid who came from modest means and made it to the majors, The AP wrote.

"I remember him coming out to practice and not having enough money to eat," his former coach Danny Freeman told mourners, according to The AP. "Here was a poor kid who had the opportunity and took it. He was a great competitor."