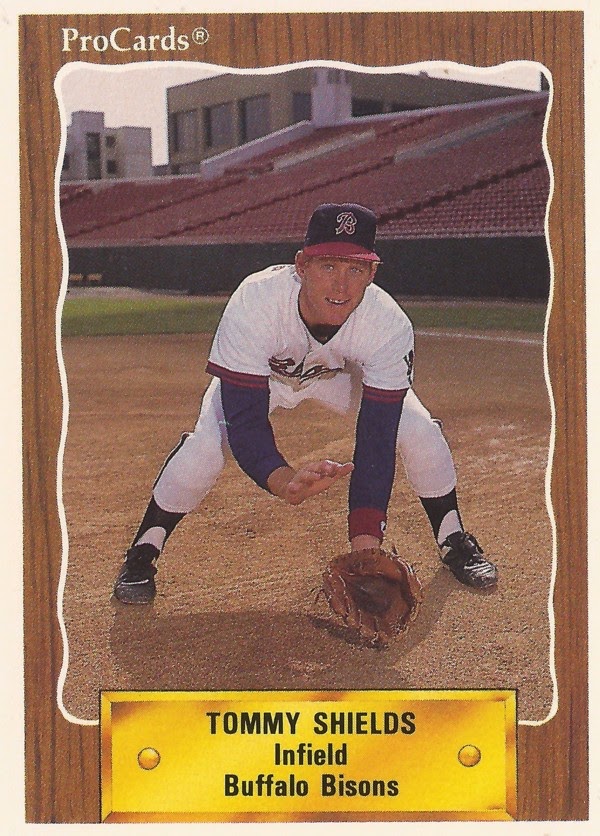 In his eighth season as a pro, Tommy Shields was finally getting his first major league starts in April 1993.

Shields was happy to be there, but he also knew he wanted more.

Shields ended up showing what he could do in 20 games that year for the Cubs. What he could do was six hits in 34 at bats, a .176 batting average. He never got back to the bigs.

Shields, though, has gone on to a long career as a minor league manager and coordinator, serving for 2012 as manager at rookie Burlington.

Shields career began in 1986, taken in the 15th round of the draft by the Pirates, out of Notre Dame.

Shields started at short-season Watertown and single-A Prince William. He hit .283 between them. Shields then lost 1987 to injury, returning in 1988 to single-A Salem.

Shields also made AA Harrisburg for the first time that first year back. In 57 games there, he hit .308.

He returned to Harrisburg for 1989, then made AAA Buffalo in 1990. At Buffalo, Shields hit .247, without seeing Pittsburgh.

For 1991, Shields was traded to the Orioles, hitting .289 on the year with 52 RBI. He also showed his versatility that year, playing all nine positions in a single game.

Coming back for 1993, Shields signed with the Cubs. He also made the team out of spring training, getting nine appearances in April. His first two hits came in his second appearance.

Shields came back in June, then again in September, ending his major league career. One more year at AAA and his playing career was done.

By 1996, Shields had started his minor league managerial career, with the Orioles' team in the Gulf Coast League. By 2008, he was a coordinator in the Braves system. For 2012, he was with the Royals at rookie Burlington, a job he continues for 2014. In one June 2012 game, Shields saw his Burlington Royals team get beaten badly, 18-2.

"We started slow and tapered off," Shields told The Burlington Times-News after the loss. "Sometimes that's the way the game is, you get shellacked. We got shellacked."