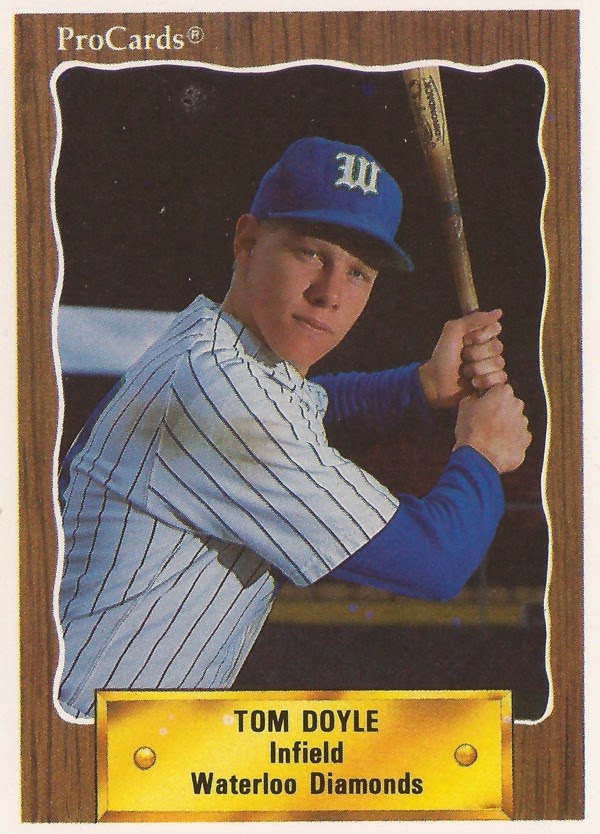 Tom Doyle had already been released once by 1990, then missed a full season trying to get back.

When he did get back, signing a minor league contract with the Padres, he started off hot, then went into a slump, The Los Angeles Times wrote.

"The minors," Doyle told The Times that August, "really test your love to play baseball."

Doyle's love was tested. But it did not break. He also survived another switch, one even bigger than switching teams. He moved from being a first baseman to being a pitcher.

He also thrived at that new position, playing nine more seasons as a hurler. He even made AAA briefly, but he never made the majors.

Doyle's career began in 1988, taken by the Phillies in the 51st round of the draft out of Redondo Union High School in California.

He hit the field with the Phillies at rookie Martinsville. In 22 games, he hit just .197 and was released. Doyle then returned for 1990, signing with the Padres. He played that year at single-A Waterloo, then 1991 at single-A Charleston. His bat never got going.

Soon, Padres organization coaches saw more potential in his arm, than his bat. By 1993, he was a pitcher. He got 10 outings that year between Waterloo and short-season Spokane. He had a 9.95 ERA.

He played 1994 between independent Regina and high-A Riverside with the Mariners. He then found a more long-term home with the Reds system.

Doyle first made AA in 1996 at Chattanooga. He also got a single game at AAA Indianapolis. He returned to Chattanooga for 1997, getting into 65 games in relief. He picked up a relief win in an August game.

His final season in the minors came in 1998, splitting time between the Reds and Rockies organizations. Doyle continued playing for three more seasons in independent ball, playing at Duluth-Superior through 2001.

Doyle went on to become a coach and batting practice pitcher for the Yankees and Rays organizations. More recently, he's served as a youth instructor in the Tampa Bay area, passing on his love for the game through TommyBaseball.com.
1990 Minor League Tally
Players/Coaches Featured:1,672
Made the Majors: 806 - 48.2%
Never Made Majors: 866-51.8%-X
5+ Seasons in the Majors: 350
10+ Seasons in the Minors:205-X
Posted by Steve78 at 1:00 PM