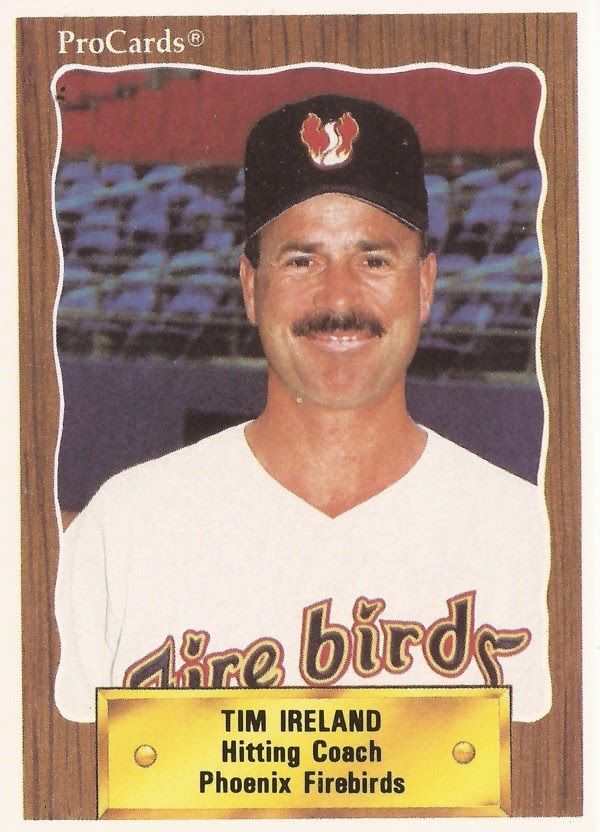 Tim Ireland talked to Baseball America in 2004 about his new shortstop, fresh up to AA Frisco from single-A Clinton.

The shortstop, Ian Kinsler, was succeeding, the Frisco manager believed, because he had a "graceful and effortless" swing.

"Defensively, so far he's shown a real feel for shortstop," Ireland added to Baseball America. "He's got good feet and soft hands, and he throws well enough. I think he's going to be here for the duration. He seems pretty legit to me."

Kinsler, of course, was legit, going on to a successful career with the Rangers. Ireland was at the latest stop in a baseball career that stretched back to the early 1970s, as a player.

Ireland's career was also one that saw him play in Japan and play in the majors for all of 11 games. His playing career over, Ireland has gone on to a long career as a coach, manager and a scout.

Ireland's playing career ended in 1985. By 1989, he was managing in the minors, at Salinas in the California League. In August, Ireland helped young pitcher Dave Cantrell keep going after an 0-11 start.

"When you're 0-11, you can't attribute everything to bad luck," Ireland told The Los Angeles Times. "Dave has had some control problems, which can be a pitcher's worst enemy."

He moved to AAA Phoenix in 1990, serving as a coach. By 1992, he was a manager again, at single-A Stockton. He then spent three seasons heading AA El Paso, then arrived at AAA New Orleans in 1996.

In 1997, he managed AAA Tucson. In 1999, he was a scout for the Rockies, serving as Pacific Rim coordinator. With the Rockies, Ireland spotted a young pitcher in Panama named Manuel Corpas.

Ireland has since served as manager of AA Tulsa and Frisco, and AAA Oklahoma. In 2009, Ireland was serving as a scout and base running coach for the Rays.

"It's actually not about baseball," Ireland told The Times. "It's about cultures that still value hard work, education and the family unit, and have pride in what they produce."
To read about Tim Ireland's playing days, go to Tim Ireland, His Ability