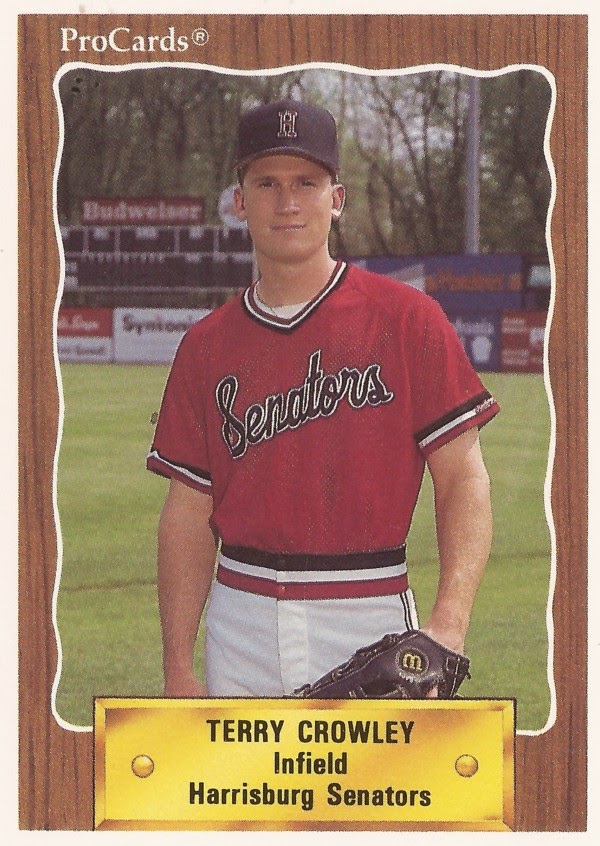 In exchange for an outfielder with big league experience Joe Orsulak in November 1987, the Pirates received two young minor leaguers, one of them being Terry Crowley, Jr., the other being a player named Rico Rossy.

"We feel we've acquired two outstanding infield prospects," Pirates GM Syd Thrift told The Pittsburgh Press. "We followed Crowley in his free agent days and were very high on him. We were also impressed with his performance in the Carolina League this past season."

One of the two minor leaguers the Pirates acquired eventually made the majors. That player wasn't Crowley.

Crowley's career began in 1986, taken by the Orioles in the eighth round of the draft, out of Dulaney High in Maryland. He signed with Baltimore, choosing the pros over James Madison University.

He was taken by the same team where his father Terry Crowley, Sr., served as hitting coach. The elder Crowley played in 15 major league seasons, before going on to his long career as a coach.

The younger Crowley's brother Jim Crowley also played ball, playing five seasons coming out of Clemson University. He also didn't make the majors, but Jim Crowley credited his brother in 1991 with adjusting to playing as the son of a former major leaguer, how to ignore heckling, The Bangor Daily News wrote.

Terry Crowley, Jr., started his professional career at rookie league Bluefield, hitting .252 in 59 games. He moved to single-A Hagerstown for 1987, hitting .302 in 78 games. At one point in 1987, the 19-year-old Crowley was the youngest player in the league.

In 1988, with his new organization the Pirates, Crowley played between single-A Augusta and Salem. He also got a 10-game look at AA Harrisburg.

He returned to Salem for much of 1989, getting another 30-game look at Harrisburg. In August, he tripled and scored in a game against Reading. In September, Crowley used another triple to knock in two runs.