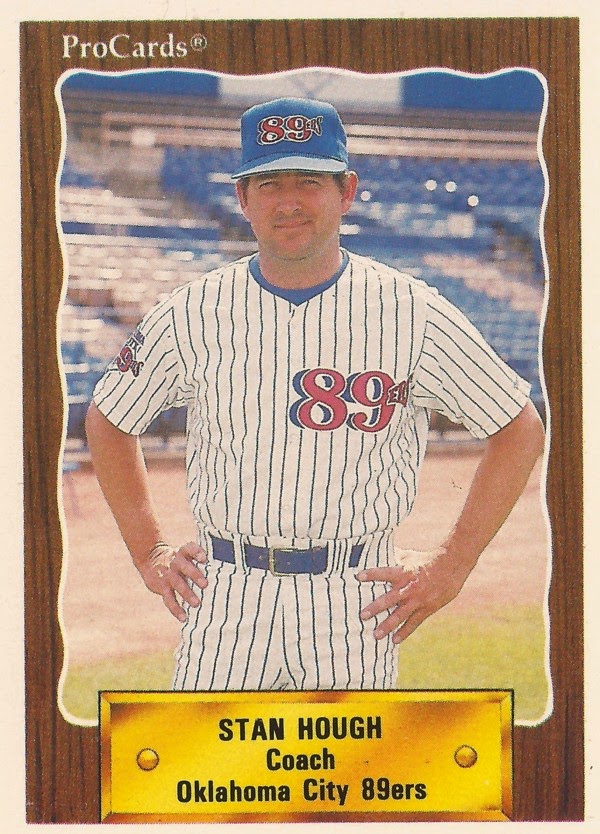 It wasn't the big promotion, but it was a promotion and Delmarva manager Stan Hough delivered the news to Gregg Davies straight.

Davies was going in August 2003 from single-A Delmarva to high-A Frederick.

"It wasn't explained to me at all," Davies told The Baltimore Sun. "(Hough) just told me I was going to Frederick. I didn't ask any questions."

Davies, though, never would get the big promotion. Neither has Hough.

Hough's playing career began in 1974, taken by the Mets in the second round. He started at rookie league Marion, hitting .253, with three home runs. That August, Hough hit a pinch-hit, three-run, go-ahead home run against Kingsport.

The catcher made AA Jackson in 1977, then hit AAA Tidewater in 1979. But Hough never could make Flushing. He arrived in the Astros system in 1981, playing at AA Columbus that year and the next.

In 1983, Hough started his coaching career at single-A Daytona Beach. Hough and his team celebrated a first-half championship with the team, getting shaving cream and mustard on his jersey in the celebration. That year and the next two, though, Hough still got into a handful of games as a player.

Hough got his first shot at the manager's office in 1987, with the Rangers in the Gulf Coast League. In 1990, Hough served as a coach at AAA Oklahoma City, his second season with that team.
By 1997, Hough was back managing, with the independent Waterbury Spirit. There, Hough worked with players trying to keep their careers going.

"They're still playing because they want another opportunity," Spirit president Bob Wirz told The New York Times that June. ''As Stan Hough told them in advance, 'If you're just looking for a summer job we're not interested. But if you're looking for a career in baseball, we are'.''

By 1999, Hough was with the Yankees, coaching at single-A Greensboro. In 2001, Hough moved back to AAA, but as manager with the Expos at Ottawa. Hough then managed at Delmarva in 2003 and independent Fort Worth in 2006 and 2007.

"His time is coming - it's just a matter of time [before] he'll be in the big leagues," Hough told The Morning Call. "He just doesn't have to be up there sitting on the bench right now."