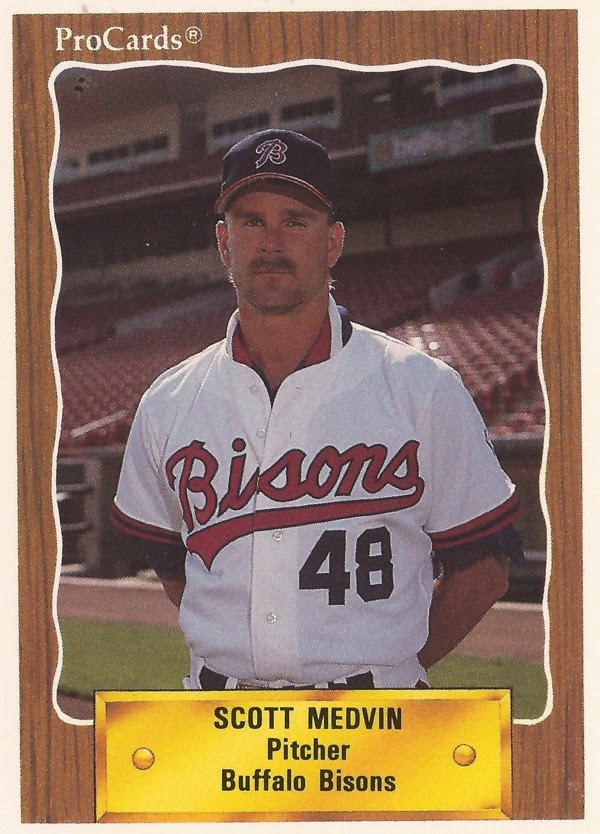 The Lakeland Tigers lost the game in late June 1985, but it wasn't because of Scott Medvin. The Tigers single-A pitcher pitched well enough in long relief, to gain the praise of his manager, Moby Benedict, according to The Lakeland Ledger.

"Medvin had a lot of bulldog in him tonight," Benedict told The Ledger after the game. "He did a heck of a job."

Medvin was in his second professional season in 1985. He would go on to to take that bulldog style to a total of seven seasons as a pro, three of those seeing time in the majors.

In the Tigers system for 1985, he pitched in 31 games with Lakeland, spending a 13-game stretch with AA Birmingham. That December, Medvin was the player to be named later in a six-player deal with the Giants.

He stayed with the Giants system for nearly two seasons, before being traded again, this time to the Pirates. The Pirates were the team who would give Medvin his first shot at the majors, in 1988.

His first call-up to the majors was after spending the spring with the Astros, narrowly missing the big league roster with Houston. He'd been taken in the Rule 5 draft the previous December.

Back with the Pirates system, Medvin got his call-up in May 1988. He got into 17 games in relief and picking up three wins in the process. He got his first win shortly after being called up, pitching the 11th inning in a 2-1 Pirates victory.

Medvin ended up with an ERA that year of 4.88 in 27.2 innings. He played the balance of the year at AAA Buffalo, getting into 39 games there. He also got invited back in 2007 for the 20th year of Dunn Tire Park.

Going into spring 1989, Medvin was given a good shot to make the big club as a setup man. Pirates Manager Jim Leyland told The Pittsburgh Post-Gazette as much in early April, saying he'd had Medvin penciled in for the slot.

But a poor spring from Medvin made Leyland get out his eraser, giving another pitcher the slot. Medvin returned to AAA.

Medvin returned to Pittsburgh that year, but only for six outings and 6.1 innings. He gave up five earned runs. He started 1990 back at Buffalo. On May 18, the Pirates sent him to Seattle.

Playing at AAA Calgary, Medvin saw Seattle for five games as a September call-up. In 4.1 innings for the Mariners, Medvin gave up three earned runs.

Medvin went on to pitch semi-pro ball several years in Ontario, for the Kitchener Panthers. But his professional career ended with that September 1990 stint in Seattle.

Back in spring 1989, as Medvin had hopes of making the Pirates to start the season, he spoke to The Pittsburgh Press of his frequent moves, and his hopes to make it in the big leagues.

"I'd hate to look back 20 years from now and say I didn't give it my best shot," Medvin told The Press. "I'd be kicking myself in the rear. A lot of guys probably have more talent than I do, so working hard is one of the ways I can make up for it."