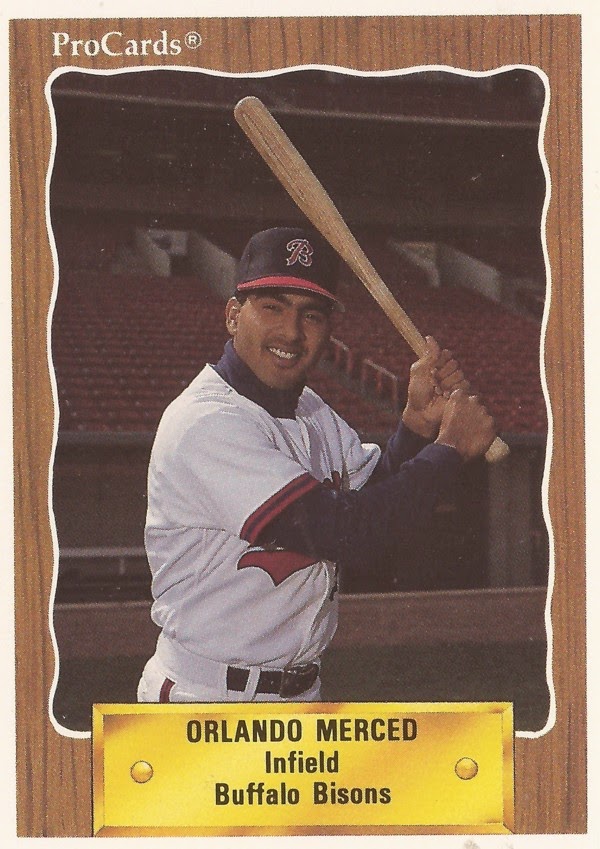 By season's end, Orlando Merced knew he wasn't going to take home Rookie of the Year honors, despite his break-out rookie campaign for the Pirates that year in 1991. A late injury diving back into second base helped see to that, shutting him down for the last week.

But, going into the playoffs, Merced wasn't going to let his injury prevent him from playing, in the National League Championship Series, or the World Series.

"I'm getting a chance to do what a lot of players don't do who play or 12 years," Merced told The Beaver Country Times in the regular season's final days. "I have all winter to heal. They always say no pain, no gain. In my case, that's true."

Merced, who hadn't started since Sept. 26, announced his return to the starting lineup in Game 3 of the NLCS, taking the first pitch from John Smoltz deep to center for a lead-off home run and an early Pirates lead.

Merced ended up finishing a distant second in the National League Rookie of the Year balloting that year, to Jeff Bagwell. Merced finished the year with a .275 average, 10 home runs and 50 RBIs.

Merced made his major league debut in June 1990, playing 25 games for the Pirates that year. Sent down in late July, the Pirates made clear Merced was on their radar.

"We like Merced," Pirates manager Jim Leyland told The Pittsburgh Post-Gazette. "He gave us some versatility, but it's tough for a young guy to execute in that role."

"The only thing you can try to do is keep hitting the ball the same way," Merced told The Associated Press as spring training wound down, "and maybe the next time it will come through for you. ... All I can do is try to do my job and hope the people in charge make the right move."

The right move, the Pirates felt, was to send Merced down. But he wouldn't stay down long, called back up in mid-April. He soon convicted the Pirates to let him stay.

He hit a tie-breaking home run in mid-May, capping a five-game stretch where he went 9 for 18 with three home runs, according to an AP account. In July, a Merced three-run shot contributed to an 11-7 Pirates victory. In September, another Merced three-run shot came in a pinch-hit role, in the ninth inning, to key a 12-10 Pirates win.

The Pirates went on to win the division. But Merced's Game 3 NLCS lead-off home run would go to waste as the Pirates lost the game 10-3 and went on to lose the series 4-3.

Merced's 1992 campaign wasn't as good, he hit just .247 with six home runs. Perhaps it was his vision. He got glasses by September and started hitting better, according to The AP. He had been driving behind his wife when he realized he couldn't read her license plate.

"I'm picking up what I couldn't see before," Merced told The AP. "I'm seeing the seems on the ball a lot better."

By June 1993, Merced was seen as getting back to his rookie form. He was hitting .364 by early June. He hit .313 on the year. "When I came out of spring training, I told myself I wanted to make everything count this season - every game, every at-bat," Merced told The AP.

Merced stayed with the Pirates through 1996, when he was traded to the Blue Jays. He played 1997 through 1999, starting with Toronto, then going through Minnesota, Boston and then Chicago and finally Montreal.

Merced played 2000 in Japan, with the Orix Blue Wave. He returned stateside for 2001 to join the Astros. He played his final three seasons in Houston.

Merced played his final game in September 2003. But he returned for spring training 2004, hoping to make the roster of his first club, the Pirates. But a quiet spring meant no spot for Merced.

"It was going to be my last year," Merced told The Pittsburgh Tribune-Review after being cut. "I was looking forward to doing some damage off the bench in Pittsburgh. Now, that's not an option for me anymore."