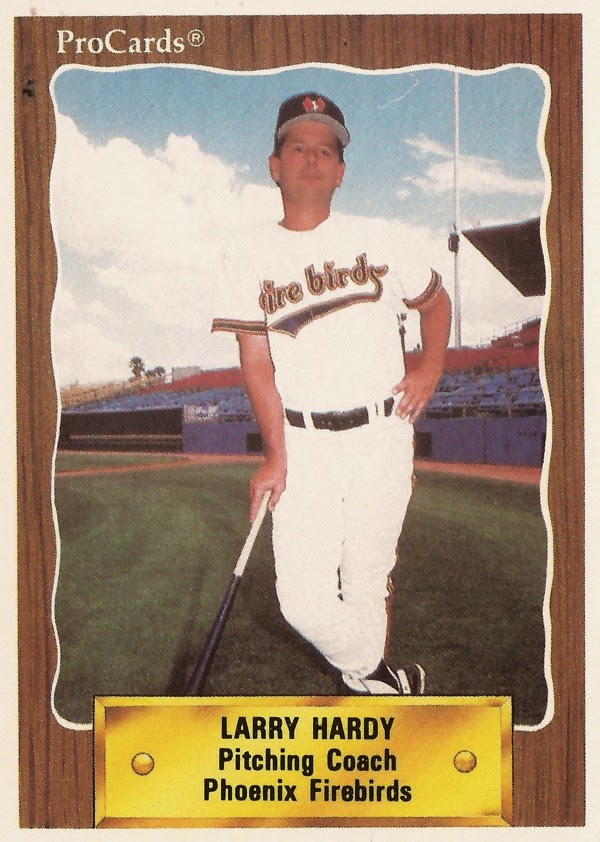 Larry Hardy yelled at the young pitcher. The pitcher had blown out his arm that spring and, by July, the pitcher was ready to quit.

Hardy, a baseball man the player later described as "a great, no-nonsense, straight-shooting pitching coach," was blunt. It was going to take hard work, but the pitcher owed it to himself to take the shot. The pitcher, Hardy believed, had real major league potential.

"Quitting is obviously your call," Hardy told young Blue Jays prospect David Wells in July 1985, Wells recalled in his 2003 memoir 'Perfect I'm Not,' "but before you go, I wanted you to know exactly what you're walking away from. The obvious question here is 'How bad do you want it?'"

Wells wanted it. He made it back, to the majors and to the top of the game. Hardy himself, had been to the majors before, as a pitcher, and he would get there again, watching over and instructing other players as a major league coach.

Hardy started coaching after pitching for seven years as a pitcher in the San Diego and Houston organizations. He pitched in 94 games of relief with a 5.29 ERA over three seasons. Of those appearances, 76 came with the Padres in 1974.

Traded to the Astros for 1976, Hardy closed out his major league playing career with 15 more appearances and a 7.06 ERA. But he wasn't done playing. He spent three more seasons playing with the Astros' AAA team in Charleston. He also started his coaching career.

"He pitched like he knew what he was doing," Hardy told The Toledo Blade in 1979 after an 8-plus inning outing by Charleston's new pitcher Dennis Miscik.

Hardy went on to coach and manage with the Blue Jays system, running into Wells by 1985. Wells returned to Knoxville in 1986, Hardy was managing. He was also working with his other players.

After one May game, Hardy told The Orlando Sentinel that he believed his team had given away the game to Orlando.

"We gave them one the other night, too," Hardy told The Sentinel. "Bases on balls and errors get you in trouble every time."

After going through the Giants system as a coordinator and then coach at AAA Phoenix, Hardy found himself back in the majors, with Texas.

Hardy spent six seasons as the Rangers' bullpen coach, then moved up to the top pitching spot for 2001, a job, however, that was brief, with Hardy returning to the bullpen by June.

"Last year, we didn't pitch well for whatever reason," Hardy told The Associated Press as he started the season as Texas' new pitching coach. "Whether it be bad defense or we threw too many balls, we just didn't pitch well. I know they're capable of pitching well. I want to have the opportunity to prove that. For me, it's that simple."

But throughout his career, perhaps his most famous player linked to Hardy was Wells.

"I practically bear-hugged the poor guy, knowing full well that I owed him my career," Wells wrote of returning to Knoxville in 1986 and seeing Hardy. "Seventeen years later, I still feel that way."