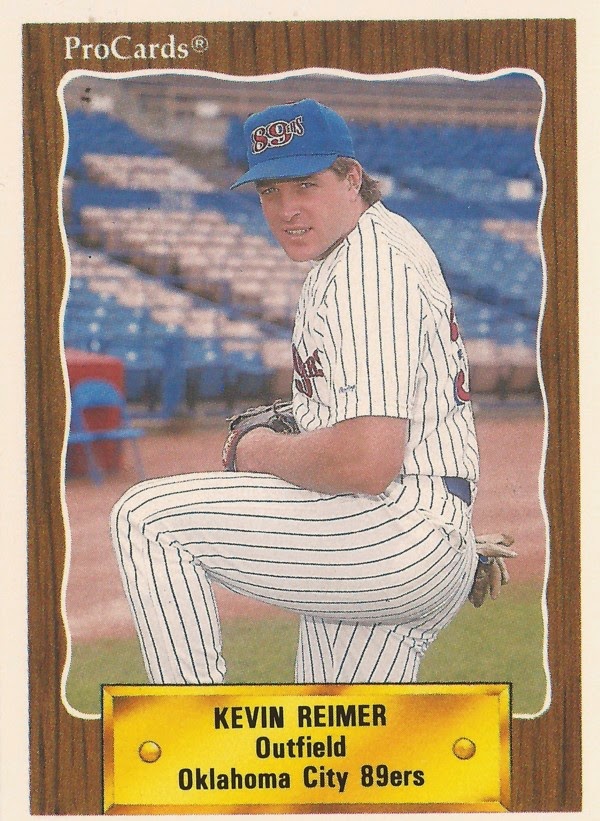 Kevin Reimer showed consistency playing at AA Tulsa in 1988, his manager Jim Skaalen told The Los Angeles Times in August. Reimer just had to keep it up.

"If he continues this way, there'll be nothing that stops him," Skaalen told The Times. "He hits left-handers very well, he's been consistent and has great power potential. The organization is really looking at him with a lot of interest now. He's opened up a lot of eyes."

Reimer opened enough to make the jump from AA Tulsa to the majors that September, playing 12 games for the big club. Reimer would go on to a career that touched six major league seasons, five with the Rangers and one with the Brewers.

It was the Rangers who started Reimer's career in 1985, taking him in the 11th round of the draft. That year with Tulsa, in 1988, was Reimer's first above single-A. He showed his power in April 1987, playing for single-A Port Charlotte. He hit five home runs in his team's first seven games, according to the St. Petersburg Times.

He first made AAA Oklahoma City in 1989, staying there much of the year. It was in 1990 that his major league playing time increased, to 64 games, hitting .260.

One of his 1992 home runs came in August, off Kevin Appier. It was the longest hit at Arlington Stadium up to that point in the year. Reimer had to give Appier credit, but Reimer also said he knew what pitch to expect.

"He throws a lot of good pitches," Reimer told The Associated Press after the game. "But he also likes to keep the ball around the plate."

Reimer was left unprotected in that off-season's expansion draft. The Rockies selected him, then flipped him to the Brewers for franchise-staple Dante Bichette.

With the Brewers some teams saw Reimer as a way around Greg Vaughn. Reimer tried to show them that was a bad choice.

"If they want to walk me, he'll make them pay for it," Vaughn told The Milwaukee Sentinel after a May game in which Reimer knocked in two after Vaughn was intentionally walked. "They'll have to deal with him."

Reimer played in Japan in 1994 and 1995, returning stateside in 1996. He played for the Twins and then the Mariners systems. He returned to AAA Tacoma for 1997, his final year.

Sent back to Tacoma for 1997, Reimer was optimistic. If the Mariners needed him, he'd be there.

"I'll go down and be ready," Reimer told The Associated Press in March. "I'm just happy to have this opportunity."