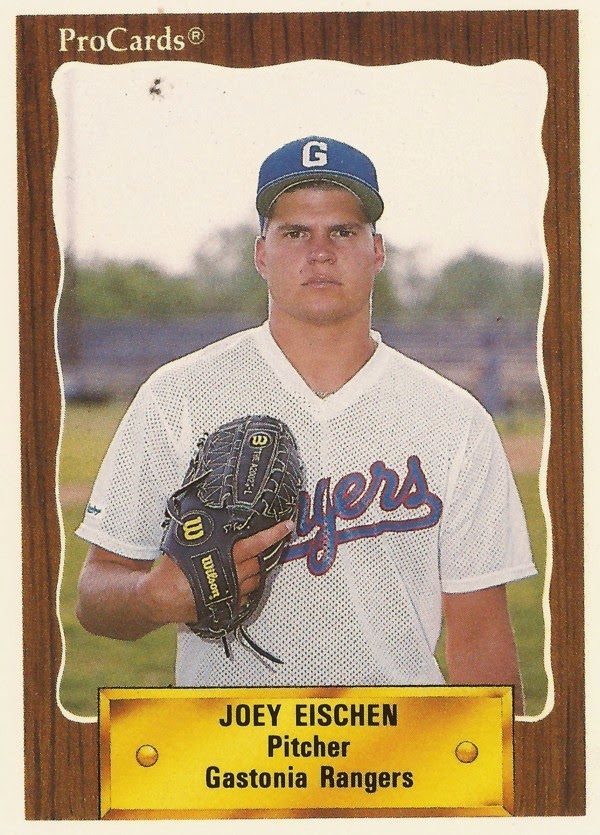 Joey Eischen didn't give up a run in his first four relief innings for the Tigers in 1996 and he offered The Toledo Blade a reason why.

It had to do with Eischen's unusual approach to pitching.

"I'm pretty excitable on the mound," Eischen told The Blade a week after being traded from the Dodgers. "Maybe that helps me because the hitters think I'm a little different out there. Maybe they're a little scared of me because they don't think I know what I'm doing or that I'm a little psychotic."

Eischen took his unusual approach to the Tigers that year in his third season with time in the majors. He went on to get in a total of seven more big league campaigns, getting six of those in a second half of his career with the Expos and Nationals.

Eischen's career began in 1989, taken by the Rangers in the fourth round of the draft out of Pasadena City College in California.

He played his first season at rookie Butte, moving to single-A Gastonia for 1990. He then was traded mid-season 1991 to the Expos with two others for Oil Can Boyd.

Eischen, playing for the newly minted Nationals in April 2005, encountered Bush in the clubhouse on in the club's Washington debut. Bush knew Eischen's name and he remembered trading Eischen, the pitcher told The Associated Press later.

With the Expos, Eischen made both AA Harrisburg and AAA Ottawa in 1993. In 1994, he made his brief major league debut. He picked up two outs for the club June 19, giving up four earned runs.

Years later, at an event marking the 20th anniversary of the 1994 squad, Eischen recalled getting his shot on that team.

"I've been on a lot of different teams," Eischen said in 2014 at a rally for Expos fans in Montreal, "and it was a very unique special thing, between the coaches and players. They set the standard and kind of showed me how to be a big leaguer, how to play the game. Just a great group of guys."

The Expos traded Eischen to the Dodgers in May 1995, then the Dodgers traded him to the Tigers in mid-1996.

Late that August, Eischen picked up his first major league win, a relief effort against the Royals. After some airplane delays, Eischen's mother was there to witness it.

"This is one of the best days of my life," Eischen told The AP afterward, "and I wanted her to be here when I got my first win."

In 1997, he got into a single game with the Reds. Then he didn't return to the majors until 2001. In the meantime, he played in the minors with the Reds, Diamondbacks, Indians and Expos. He even spent time in independent ball, at Adirondack.

He got back to the majors with the Expos and he didn't leave the organization until he'd played his last game in the majors.

His final season, 2006, was cut short by shoulder surgery. Eischen had troubles with the shoulder and getting the ball over the plate through April and May, before the team finally shut him down.

"That goes to show you what kind of heart this guy has and the warrior that he is," Nationals manager Frank Robinson told MLB.com. "He goes out there, takes the ball and pitches."