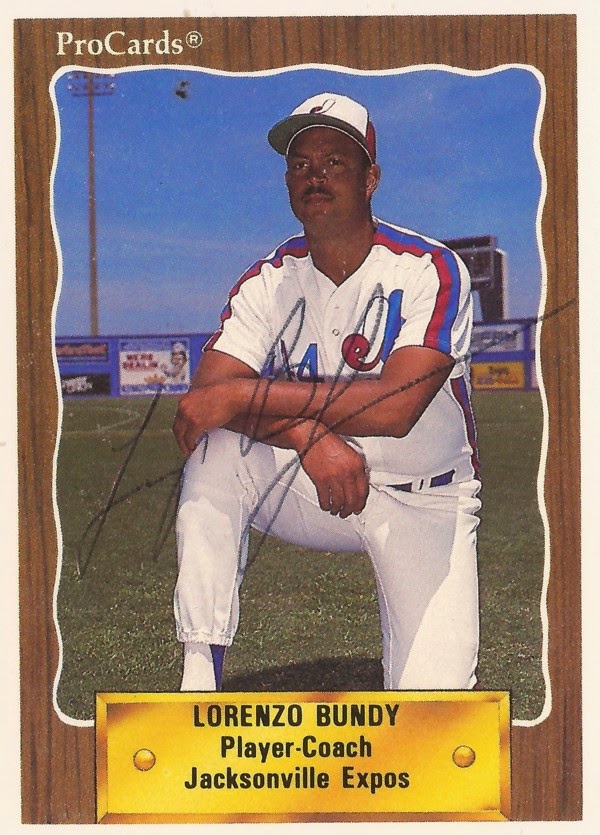 Invited to join the major league club as a coach for 1998, Lorenzo Bundy recalled it didn't really hit him what had happened until the home opener.

It was Bundy's first big league job after more than 15 years in the game as a player, coach and manager, including the previous three seasons in the Marlins organization.

That day everyone received their World Series rings. Bundy recalled his thoughts turned to his parents, who by then had both passed on.

"I was thinking how proud would they have been able to see their son (make the majors) - and I know they were up there looking down," Bundy said. "It was a pretty emotional moment."

Bundy has since served as a big league coach with the Rockies and Diamondbacks. For 2014, he's back in the majors, as third base coach for the Los Angeles Dodgers.

Bundy spoke with The Greatest 21 Days by phone from Los Angeles on a recent off day, before the team traveled to Arizona.
Bundy traced his life in baseball from his youth in Virginia, to college and the pros. He also traced his move from playing professionally to coaching professionally. It was a move he said he accepted and then embraced, believing coaching would be what could take him to the majors.

Bundy's playing career spanned nine seasons, starting in 1981 and running to 1989. He made it to AAA in four of those seasons, but never getting into more than 20 games in a season. He also played two seasons in Mexico.

When he made AAA later in his career, he was on the team, but he played sparingly. He came to realize he wasn't going to get to take that next step.

He continued to try to be the best teammate he could be, do whatever the team needed him to do.

Bundy spent his final year with the Expos. He started the year at AAA Indianapolis. Soon, though, the team needed him to go down to AA.
There were a couple players at Jacksonville that the team thought Bundy could help with. Those two players were Delino DeShields and Marquis Grissom, Bundy recalled.

So, that's where Bundy went and he believed he had a positive influence on the young up-and-coming stars.

"That was kind of the writing on the wall," Bundy said of the end of his playing career.

The next spring, he was offered a player-coach position back at Jacksonville. Bundy accepted, though he never got activated to play.

"I could have probably played in Mexico, in the Mexican summer league for another 3, 4, 5 years," Bundy said. "But that probably wasn't going to lead to a ticket to the big leagues.

"When the Expos offered me a coaching job in the minor leagues, I was a little bit over 30," Bundy added. "Most guys continue to play. I didn't. I decided if I was going to get to the big leagues, it wasn't going to be as a player, it was probably going to be as a coach or a manager."
Halfway through his first season as a coach, the Expos came calling again. Team minor league director offered Bundy the manager's job for the Expos' rookie Gulf Coast League team.

That year the team had several high draft picks, Bundy recalled, and they were all going to the GCL, including Rondell White and Shane Andrews.

He called watching over them a big responsibility.

"This was a stepping stone in these young men's careers, their first experience in professional baseball, and I was given that responsibility," Bundy said. "That made me feel good."

The rookie league experience was also new to Bundy, he recalled. Bundy never played in the GCL, instead breaking in at single-A.
Bundy stayed with the Expos through 1994, managing at single-A each season. In 1993 and 1994 he managed at single-A Burlington in the Midwest League.

For 1995, he arrived in the Marlins system, serving as hitting coach at high-A Brevard County. In 1997, he became the team's manager. All along, as well, Bundy managed in winter ball.

"He was always the first one there and the last one to leave," Hennis wrote in an e-mail, "and had a great mind and passion for the game."

Bundy has taken that passion for the game to other major league coaching jobs, following Jim Leyland to the Rockies in 1999 and serving as bench coach for the Diamondbacks in 2004.

For 2014, he returned to the majors as the Dodgers' third base coach.

In between his major league jobs, Bundy served as a hitting coach and manager at AAA. He served four seasons as the AAA manager for the Dodgers.
Bundy said it's important for young players to realize that the game isn't about them. The game will always be the game, even after individual players are gone.

The best way to learn, he said, is from failure.

"There will be moments in this game where things aren't going to go your way," Bundy said, "and you'll have to find a way to get yourself through it, whether it's at rookie league or at the major league level."

Bundy's main philosophy is to respect the game. That's what he's worked to do now for more than three decades.

And he's tried to impart that philosophy on the players he's coached and managed over the years.

"Will things go right all the time? Probably not, just because it's a tough game to play," Bundy said. "But we put ourselves in positions, as far as having our routines, having a great work ethic, paying attention to detail. If you have talent, good things will happen."