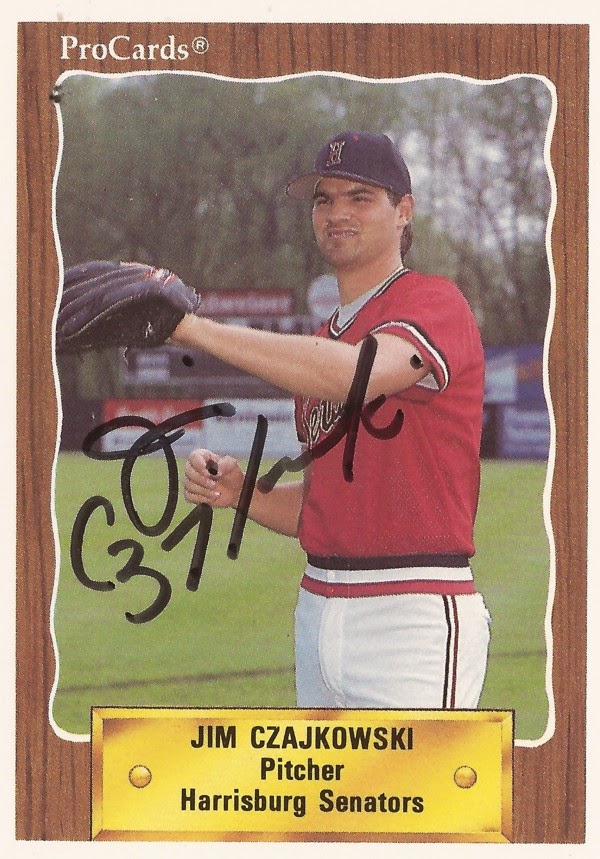 Jim Czajkowski spent his high school years around San Francisco and he had seen plenty of games at Candlestick Park.

This game in July 1994, though, it was 75 of Czajkowski's family and friends who were going to Candlestick. They were there to see Czajkowski's major league debut.

"Warming up my first time, I didn't even throw a strike," Czajkowski recalled recently to The Greatest 21 Days. "I was all over the place."

Czajkowski was making his major league debut for the Colorado Rockies, finally making it to the bigs in his ninth season as a pro.

Once he was called into the game, though, those nerves he had in warmup disappeared, he recalled.

"They called me in and I stepped onto the mound and it was like a peace," Czajkowski said. "The nerves were gone. I was ready to go."

He just had to get past Barry Bonds, Matt Williams and Darryl Strawberry.

Czajkowski spoke with The Greatest 21 Days before a recent game at Trenton's Arm & Hammer Park, where Czajkowski's Fisher Cats were taking on the Trenton Thunder.
Czajkowski covered his early time in the game, turning pro and then his efforts to stay in the game long enough for someone to give him his shot at the bigs. That was something he had prayed about, asking to get just one day in the majors. He got 15.

He then told of working to get back in the game, trying to get someone to give him a shot at coaching. He's been coaching in the minors ever since.

Czajkowski made the pros in 1986, taken by the Braves in the 29th round of the draft out of the University of North Alabama.

Czajkowski recalled taking the transition from college to the pros well. He had never liked pitching against aluminum bats. Even when he was a kid, he recalled bringing wood bats because he hated aluminum so much.

"It was just natural," Czajkowski said. "These guys got wood bats in their hands. I can break them. It doesn't fly as far as it does on an aluminum bat because they can't swing them as fast. That was a great thing for me because it gave me a chance to pitch."
With the Braves, he also had some players to compete against. The Braves, he recalled, were loaded with prospects at the time. Looking at what they had and what he had, he thought he compared favorably.

But he also knew he had work to do.

"If I'm going to be as good as some of these guys that I've got to compete against to get to the big leagues," Czajkowski recalled thinking, "then I've got to work hard."

All the while, though, Czajkowski recalled that work not really being work.

He'd always followed the game. He collected baseball cards as a kid. He kept up with the teams and the players. Now, in the summer of 1986, he was on the field himself. And he was getting paid to do it.

"My daily work," Czajkowski said, "that was like, you know, going to a party every day. It wasn't work. It was having fun doing what you do."
Czajkowski's first stop was rookie Idaho Falls. He recalled starting there as a reliever, then getting a spot start. In that spot start, he threw a complete game and he started the rest of the season.

Then Czajkowski started changing organizations. The Pirates took him that winter in the Rule 5 draft. After playing at AA Harrisburg and high-A Salem, Czajkowski moved to the Brewers in a trade.

He recalled realizing he was an insurance policy at Harrisburg for guys with more time in the organization. The Brewers then traded for him mid-season, looking for an older pitcher.

Czajkowski played with the Brewers at AA El Paso for two seasons. He then signed with the Cubs for 1993 - his seventh season as a pro.
As the years wore on, Czajkowski recalled drawing inspiration from an unlikely source: M.C. Hammer's 1991 song "2 Legit 2 Quit."

"I look at my fastball and I look at my stuff and it's too legit to quit," Czajkowski said. "I've got a family and stuff. This is what I know. I've got to stick this out."

He also prayed that he'd make it.

"I know there some bad times to go through, but the good times are going to take over," Czakowski recalled telling himself, "praying to God, saying 'God, just give me one day in the big leagues and it'll make it all worth it."

Czajkowski joked that, looking back, he shouldn't have said he'd settle for one day. He should have asked for five years. Because, Czajkowski said, "He said, 'well, the joke's on you. I'll give you 15 days."

Those 15 days started in late-July 1994. They ended with the beginning of the player's strike.